Started: 1910
Ended: 1912
Main
History
Artworks
I do not believe in objects. I believe only in their relationships.

In 1920 the leading promoter of Georges Braque's and Pablo Picasso's work, Daniel-Henry Kahnweiler, published his book Der Weg zum Kubismus (The Rise of Cubism). It would become the first authoritative text on Cubist history and practice and it was here that the term Analytic Cubism was first introduced. Cubism was a movement that ran for close to two decades, but historians have tended to single out for special consideration its two most important phases: the Analytic phase (1910-12) and the subsequent Synthetic phase (1912-14).

Analytic Cubism defines a style of Cubism that fractured the subject into multi-layered, angular, surfaces that brought still lifes and portraiture close to a point of total abstraction. Following a two-year period of experimentation where Cubist artists took their lead from the faceted landscapes of Paul Cézanne, Picasso and Braque retreated to the studio where, over the ensuing two years, they honed the style of Analytic Cubism. The cadre of Cubist painters, meanwhile, have been put by critics into one of two camps: the "Gallery Cubists", namely Picasso and Braque, and a "second tier", the so-called "Salon Cubists", namely Juan Gris, Jean Metzinger, Fernand Léger, Robert Delaunay, and Albert Gleizes. Gris, however, would command equal status with Picasso and Braque when the Synthetic phase came to the fore.

Before Picasso and Braque had (seemingly) single-handedly reinvented approaches to pictorial perspective, Paul Cézanne had been the primary influence on the exploration of artistic form and plasticity. During the late 1800's Cézanne began to represent the landscape through spheres, cones and cylinders allowing for the various perspectives of the picture plane to lead the eye towards a dedicated focal point. As Jean Metzinger and Albert Gleizes wrote in Du Cubisme (1912), Cézanne's work, "proves without doubt that painting is not - or not any longer - the art of imitating an object by lines and colors, but of giving plastic [solid, but alterable] form to our nature".

The Important Artists and Works of Analytic Cubism

Art critic Roberta Smith observed that Braque's contribution to Cubism can be traced back to "his early training in his father's trade [...] which included sign painting and the painting of imitation wood and marble". His "apprenticeship" was, according to Smith, "clearly the basis for his interest in what he called the 'tactile' or 'manual' space of a painting". For his part, Braque explained that "When fragmented objects appeared in my painting around 1909 [as they do here] it was a way for me to get as close as possible to the object as painting allowed".

In what can be cited as a prototype of Analytic Cubism, Braque paints multiple picture planes in order to fracture and distort images of a violin, a palette, and sheet music. The arrangement of the objects emphasizes the canvas's vertical axis, while the limited color palette stresses (rather than distracts from) the overlapping forms, creating a density that seems somehow tactile. Braque would further emphasize the breaking down of the subject in this way it works such as Piano and Mandola (1909-10) which was described by art historian Jan Avgikos as, "an otherwise energized composition of exploding crystalline forms".

According to art historian Francis Frascina, Braque and Picasso's still lifes become "more difficult to decipher without knowledge of the systematic [language] that the artists appear to be using [and for] many Modernists, the works are on the 'threshold' of a formal development to abstraction", even though the artists themselves were seeking a "realistic orientation" through their work. We find clear evidence of this at the upper left of Violin and Palette, where we notice that Braque has painted a trompe-l'oeil nail, from which hangs the palette of the work's title. It is an illusionist technique that serves to illustrate the contrast between the nascent Analytical Cubism as measured against the traditions of single-perspective illusionism.

Broken down into planes and facets, and rendered in a limited palette of gray, black, white, and brown, we can begin to put together an image of Picasso's sitter (the art dealer Daniel-Henry Kahnweiler). The viewer can discern his clasped hands at the bottom of the frame, the knot of his tie, and the almost geometric intersection of the bridge of the nose with the eyebrows. Due to the intricacy of the overlapping opaque and transparent planes and the limited color palette the central subject takes on a kind of density that dissolves at the edges into the abstract background. As art critic Jonathan Jones put it, the famous art dealer "haunts [the painting] like a shadow of himself, a nuclear ghost imprinted in space [...] It is not a picture of him. And yet he is fully there, his identity glimpsed with a strange warm intimacy through the shattered glass of the modernist age".

Jones said this work was "Revolutionary and discomforting" and a masterpiece that brought on "a comprehensive dismantling of traditional portraiture" that was "intangible" and "indescribable". The difficulty in deciphering these near-abstract artworks, however, prompted several critics to refer to Analytic Cubism as a hermetic practice. This concept relates to the idea that the language of Analytic Cubism was so revolutionary it had no precedence in art history and was so airtight (so hermetic) it had to be learned from scratch. At the same time, what Picasso called "attributes," such as the wave of hair and the clasped hands (the more highly discernible aspects of the image), helped the viewer by anchoring the subject to reality giving her or him an initial point of reference; giving the viewer "something to build on", in other words. 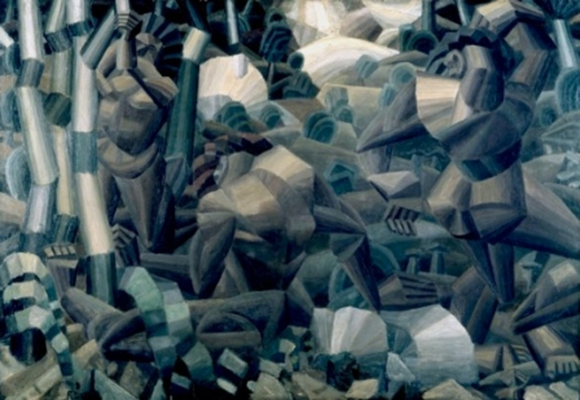 Employing a somber palette of gray, white, grayish blue and green, this work is a complex and energetic layering of conic, cylindrical, and tubular planes. Léger described it in fact as a "battle of volumes" explaining that "I thought that I shouldn't give it any color. The volumes alone were enough". Though it is a landscape, which places it closer generically to the early phase of "Cézannian" Cubism, the painting is in keeping with the Analytic preference for a restricted color palette and a willingness to test the limits of figurative art. As if solving a picture puzzle, the trained eye eventually discerns the three nudes, one standing at the right and left and the other reclining on the ground in the center, and the resemblance of some tubular shapes to the trunks and roots of trees.

Léger's works take Cézanne's vision of a natural world composed of cones, spheres, or cylinders as the basis for a distinctive approach that also accommodates the mechanized forms of the modern world. Léger became associated with the Salon Cubists under whose auspices his idiosyncratic Analytic approach became a vital part of its aesthetic and theoretical explorations. As contemporary art critic Nechvatal put it, "Léger's early Cubist works are full of astonishing, automated, compulsive, and practically cinematic stutter effects". Léger subsequently developed his use of cylindrical and tubular shapes and a progressively bolder color palette to develop a signature style that became known as "Tubism". Nechvatal added, "his brand of Cubism evolved into an automaton-esque figurative style distinguished by his focus on cylindrical forms. These cylindrical android figures express a synchronization between human and machine that is most relevant today".