Started: 1862
Ended: 1892
Main
History
Artworks
Impressionism is only direct sensation. All great painters were more or less Impressionists. It is mainly a question of instinct.
1 of 10

There are no lines in nature, only areas of color, one against another.
2 of 10

If the painter works directly from nature, he ultimately looks for nothing but momentary effects; he does not try to compose, and soon he gets monotonous.
3 of 10

If painting is no longer needed, it seems a pity that some of us are born into the world with such a passion for line and color.
4 of 10

What seems most significant to me about our movement [Impressionism] is that we have freed painting from the importance of the subject. I am at liberty to paint flowers and call them flowers, without their needing to tell a story.
5 of 10

It is all very well to copy what one sees, but it is far better to draw what one now only sees in one's memory. That is a transformation in which imagination collaborates with memory.
7 of 10

Work at the same time on sky, water, branches, ground, keeping everything going on an equal basis... Don't be afraid of putting on color... Paint generously and unhesitatingly, for it is best not to lose the first impression.
8 of 10

When you go out to paint try to forget what object you have before you - a tree, a house, a field or whatever. Merely think, here is a little square of blue, here an oblong of pink, here a streak of yellow, and paint it just as it looks to you, the exact color and shape, until it emerges as your own naive impression of the scene before you.
9 of 10

After 1918, as we know, enlightened public - as well as critical - esteem went decidedly to Cézanne, Renoir and Degas, and to Van Gogh, Gauguin and Seurat. The 'unorthodox' Impressionists - Monet, Pissarro, Sisley - fell under a shadow. It was then that the 'amorphousness' of Impressionism became an accepted idea; and it was forgotten that Cézanne himself had belonged to, and with, Impressionism as he had to nothing else.
10 of 10
Clement Greenberg, from essay "The Later Monet"

Impressionism is perhaps the most important movement in the whole of modern painting. At some point in the 1860s, a group of young artists decided to paint, very simply, what they saw, thought, and felt. They weren’t interested in painting history, mythology, or the lives of great men, and they didn’t seek perfection in visual appearances. Instead, as their name suggests, the Impressionists tried to get down on canvas an “impression” of how a landscape, thing, or person appeared to them at a certain moment in time. This often meant using much lighter and looser brushwork than painters had up until that point, and painting out of doors, en plein air. The Impressionists also rejected official exhibitions and painting competitions set up by the French government, instead organizing their own group exhibitions, which the public were initially very hostile to. All of these moves predicted the emergence of modern art, and the whole associated philosophy of the avant-garde.

Édouard Manet said: "You would hardly believe how difficult it is to place a figure alone on a canvas, and to concentrate all the interest on this single and universal figure and still keep it living and real." Here he hints at the innovative thinking that went into Impressionism's new way of representing the world.

Important Art and Artists of Impressionism Edouard Manet's Le déjeuner sur l'herbe (Luncheon on the Grass) was probably the most controversial artwork of the nineteenth century. It caused outrage with its frank depiction of nudity in a contemporary setting and was scorned by the high-minded salon juries and middle-class audiences of the era. But it also earned Manet fame and patronage. Rejected from the Paris Salon in 1863, it became the most controversial of the works displayed in the so-called "Salon des Refusés" held the same year in order to placate artists rejected from the main exhibition. The painting depicts two fully clothed men picnicking with a nude woman, while another scantily clad woman bathes in the background. By removing the female nude from the legitimizing contexts of mythology and orientalism, and in making his female subject confront the viewer assertively with her gaze, Manet hit a nerve in the bourgeois culture of 1860s Paris, and set the wheels of the avant-garde in motion.

Édouard Manet was born in 1832 into an upper-class family with strong cultural and political ties. In terms of age, he found himself sandwiched between the generation of the great Realists, such as Gustave Courbet, and the Impressionists, most of whom were born in the 1840s. The great irony of Manet's reputation as a controversialist is that, throughout his life, he both sought and achieved mainstream success, generally having more work displayed at the official Paris Salons than his younger Impressionist peers. Similarly, although he was friendly with the Impressionists and exhibited with them - and is now often presented as one of them - his style was in some ways very different to theirs. He was far less reliant on plein-air technique than most of the Impressionists, and, whereas artists such as Monet used loose, visible brushstrokes and blended color palettes to depict subtle tonal effects, Manet preferred sharper outlines and exaggerated color contrasts, often placing dark and light areas close together (as in the contrast between naked flesh and shadow in Le déjeuner sur l'herbe).

Nonetheless, Le déjeuner sur l'herbe stands at the forefront of the whole Impressionist project in its fearless departure from inherited forms and techniques. From the subtly flattened picture plane to the defiance of time-honored motifs of high-brow nudity, everything about Manet’s painting courted shock and even ridicule. The Impressionists were inspired by Manet's example to follow their own creative paths, and while their subject-matter was generally less outrageous than Manet's nude picnic, his pioneering work cleared the space necessary for them to work in the way they wanted to. 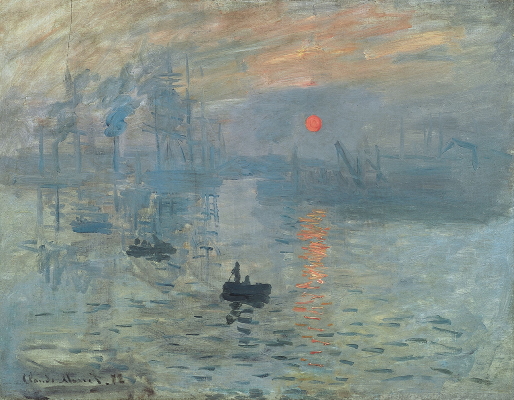 Monet's Impressionism, Sunrise is sometimes cited as the work that gave birth to the Impressionist movement, though by the time it was painted, Monet was in fact one of a number of artists already working in the new style. Certainly, however, it was the critic Louis Leroy's derogatory comments on the work and its title, in a satirical review of the First Impressionist Exhibition of 1874, that gave rise to the term "Impressionism". Leroy's review used the term as a comic insult, but the new school of painters quickly adopted it in a spirit of pride and defiance.

Claude Monet was born into a middle-class merchant family in Paris. His parents were hardworking and financially secure but by no means rich or aristocratic, and throughout his early career Monet would struggle to survive as a painter. When he was very young his family moved from Paris to Le Havre, and though Monet returned to Paris in the early 1960s to train as an artist, it was during a visit to his family in Le Havre in 1872 that he created this and a number of other similar works.

What is striking about Impression, Sunrise is the continuity of the color palette between sea, land and sky. All are bathed in the gentle blues, oranges, and greens of sunrise. The subject of the painting is not the city it depicts nor the anonymous boatmen setting out across the water, but the enveloping warmth and color of sunlight itself, or rather the "impression" it makes on the senses at a certain moment in time. This painting of light and the time-specific effects of light was the hallmark of the new style. Impression, Sunrise was one of a number of sketches of the same scene that Monet created in 1872. This serial approach to subject-matter was typical for the painter. In other cases, Monet would create large cycles of work depicting the same scene at different times of day, or during different seasons, emphasizing the way in which light and atmosphere shifted in time-specific ways. The most famous examples of this effect are in the 25 paintings that make up the series Les Meules à Giverny (1890-91), known in English as "The Haystacks". Alfred Sisley's beautiful pastoral scene showcases a gentle color-palette, evocation of tranquility and peace, and emphasis on the overall quality and atmosphere of a landscape over and above specific details and human forms. The female protagonist of this painting, serenely picking flowers, is almost entirely obscured by the dense fog that eclipses the meadow. As in much of Sisley's work, the human body seems melded into the natural scene, becoming both an aspect and expression of a wider natural world.

Born in France to English parents, Alfred Sisley met Pissarro and Monet early in the formation of the group, becoming their co-students at the Swiss painter Charles Gleyre's studio in 1862. Sisley and Monet would go on to become the most dedicated and dazzling proponents of the plein air technique, but their fortunes would take them in different directions. Whereas the middle-class Monet had achieved financial success and fame by the end of his life, the silk-trader's son Sisley, born into riches, ended his days in relative poverty after his father's business failed during the Franco-Prussian War of 1870-71. Sisley's paintings would not yield true financial success until after his death. Nonetheless, he remained prolific throughout his life, and was deeply committed to the ideals of the Impressionist school.

Indeed, the example of Fog, Voisins suggests that Sisley was perhaps the most quintessential Impressionist painter of the whole group. Focusing almost exclusively on representations of light and atmosphere while diminishing the importance of the human form - an approach that many of his peers would grow weary of later in-their careers - Sisley demonstrates his all-consuming preoccupation with representing the moment of perception.

The books and articles below constitute a bibliography of the sources used in the writing of this page. These also suggest some accessible resources for further research, especially ones that can be found and purchased via the internet.
written about impressionism
paintings