I believe in the immortality of all creatures.

Everything is dead while it lives.

To hamper an artist is a crime, the murder of germinating life!

Egon Schiele was born into modest means in Tulln an der Donau ("on the Danube"), a small but vibrant Austrian town also known as Blumenstadt, or "city of flowers." He was the third child born to Adolf Schiele, who worked as a stationmaster for the Austrian State Railways, and Marie Soukupova, who originally hailed from the Bohemian town of Cesky Krumlov (Krumau), now the site of the Egon Schiele Art Centrum, a museum dedicated primarily to the artist's work. Schiele had two older sisters, Melanie and Elvira, the former of whom often modeled for Schiele and eventually married Schiele's close friend, the painter Anton Peschka. Schiele also had a younger sister, Gerti (Gertrude), with whom he was very close, with some accounts calling the relationship incenstuous.

Although Schiele was never a prolific student, one of his primary school arts instructors recognized a natural gift for draughtsmanship in Schiele and encouraged him to pursue formal training. Following his father's death from syphilis, and having been placed under the guardianship of his uncle and godfather, Leopold Czihaczek, in 1906 Schiele enrolled in Vienna's Akademie der bildenden Kunste (Academy of Fine Arts), which Gustav Klimt had also attended. 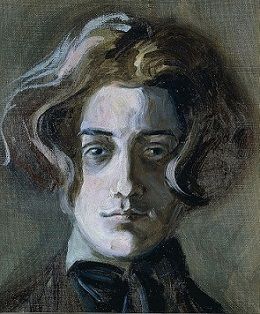 In 1907, Schiele sought out Klimt, whose work he already greatly admired, and the two quickly formed a mentor-mentee relationship that would have a major impact on the young artist's early development. Klimt not only exerted his influence over Schiele in the studio, but also in introducing Schiele to patrons, models, and the work of other artists—such as Vincent van Gogh, Edvard Munch, and Jan Toorop—about whom Schiele, despite being a devoted art student, had little occasion to learn, given Vienna's relative isolation from European avant-garde movements during this time. Through Klimt, Schiele was also introduced to the Wiener Werkstätte, the arts and crafts workshops of the Vienna Secession, a movement that had close ties to other modern art styles of the period.

In 1908, when Schiele was eighteen, he participated in his first exhibition, a group showing in Klosterneuburg, a small town to the north of Vienna. The following year, Schiele and a few fellow students left the Academy in protest, citing the school's conservative teaching methods and its failure to embrace more forward-thinking artistic practices that were sweeping through Europe. As part of this rebellion, Schiele founded the Neuekunstgruppe (New Art Group), composed of other young, dissatisfied artists defecting from the Academy.

The new group didn't waste any time, holding several public exhibitions throughout Vienna, all the while Schiele was exploring new modes of painterly expression, favoring distortions and jagged contours of form and a more somber palette than that of the more decorative and ornate Art Nouveau style. Essentially, Schiele was gradually distancing himself from the style popularized by Klimt, although the two men would remain close until Klimt's death in early 1918. If the content of Schiele's work is any indication, it appears that the mentor and mentee shared an insatiable appetite for women.

The following year was a crucial one for Schiele, both personally and artistically. In addition to participating in a number of group exhibitions—in Budapest, Cologne, and Vienna—Schiele was invited by Galerie Hans Goltz in Munich to show his work alongside members of the Der Blaue Reiter group of Expressionists, which included Wassily Kandinsky, Franz Marc, and Alexej von Jawlensky. Among Schiele's works at this time was his most famous Self-Portrait with Chinese Lantern Plant (1912), a captivating study of the artist, his face and other features replete with lines, scars, and subtle deformities. The Goltz show provided Schiele with his greatest exposure to date, revealing his rich use of personal symbolism and dark allegory to the public. 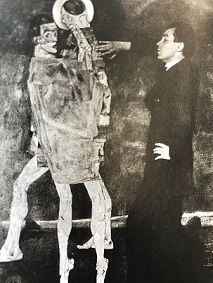 Also in 1912, while living in the Austrian town of Neulengbach, Schiele was arrested at his studio and imprisoned for twenty-four days, accused of the kidnapping and rape of a twelve-year-old girl (as in Krumau, Schiele's studio had become a gathering place for many of the town's children, attracting outrage from local residents). These charges were eventually dropped, and he was convicted of exposing children to erotic images. The police had confiscated 125 of his “degenerate” works, and in a symbolic gesture, the judge burnt one of his drawings in the courtroom (the work, showing a young girl nude from the waist down, had previously been displayed on his studio wall). The incident had a noted impact on Schiele, as he subsequently ceased his practice of using children as models, although the morbidity and sexual explicitness of his work — particularly in his drawings — appears to have increased following his release from prison.

Nonetheless, even though World War I loomed, his career flourished as he returned to Vienna. In 1913 he held his first solo exhibition in Munich and in 1914 a solo show in Paris. His personal life also took a turn, when 1915 he wrote to a friend, “I intend to get married, advantageously,” and proposed to Edith Harms, a young woman of good social standing. Though he hoped to continue his relationship with Wally Neuzil, she left him upon news of his engagement, a loss powerfully expressed in Death and the Maiden (1915).

Schiele was eventually conscripted into military service four days after his marriage. However, he never saw any real combat throughout the war's duration, and instead was allowed to continue practicing his art and exhibiting wherever he was stationed. Inspired by his wartime travels, Schiele produced a number of land- and cityscapes around this time, devoid of the artist's usual exaggerated contours.

By 1917, Schiele was back in Vienna and hard at work. That same year, he and Klimt co-founded the city's Kunsthalle (Art Hall), a new exhibition space designed to encourage Austrian artists to remain in their homeland. The following year, both poignant success and tragedy visited the artist in many forms. In February, a stroke and pneumonia claimed the life of his mentor and friend, Klimt. Just one month later, the Vienna Secession held its forty-ninth annual exhibition and devoted the main exhibition space to Schiele's work, making the affair a great commercial success. In October, his wife, Edith, six months pregnant, succumbed to the Spanish flu pandemic sweeping through Europe at the time, which claimed Schiele's life just three days later, dying at age twenty-eight. In the three days between their respective deaths, Schiele produced a number of sketches of his late wife.

The Legacy of Egon Schiele

Despite Egon Schiele's short life, the artist produced an astonishing number of works on canvas and paper. He was instrumental in formulating the character of early-20th-century Expressionism, characterized by the use of irregular contours, an often somber palette, and frequently dark symbolism. Unlike his mentor, Klimt, with whom Schiele's name remains most commonly associated, he produced a great number of self-portraits, suggesting a preoccupation with the self on a par with the likes of Picasso. Schiele's aesthetic greatly influenced both Expressionist contemporaries like Oskar Kokoschka, as well as Neo-Expressionist successors as varied as Francis Bacon, Julian Schnabel, and Jean-Michel Basquiat.