Born: March 7, 1885
Sand Bar, New York
Died: January 3, 1965
New York, New York
Early American Modernism
Main
Biography
Artworks
I try to construct a picture in which shapes, spaces, colors, form a set of unique relationships, independent of any subject matter. At the same time I try to capture and translate the excitement and emotion aroused in me by the impact with the original idea.
Milton Avery

A singular artist, Milton Avery defied stylistic trends and charted his own way through American Modernism. A quiet man who did not necessarily fit the romantic, bohemian notion of the modern, avant-garde artist, Avery boldly used color and abstracted forms to convey a unique vision of the American scene. Friends with the young Abstract Expressionists, Avery imparted his unique vision of the power of color to them, and in turn, he seemed intrigued by their explorations of the power of ambiguous, abstract compositions.

While often overlooked in the annals of American art, Avery was a touchstone not only for the Abstract Expressionists and later Color Field Painters, but also for more contemporary painters, like Peter Doig, who emphasize color to convey the moods of places and memories. While his reputation was often overshadowed, Avery's art seems newly fresh again. 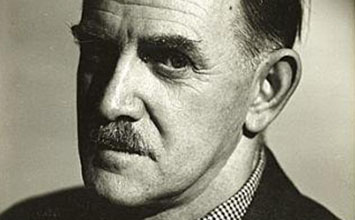 Milton Avery was born on March, 7 1885 in Sand Bank, New York. His family was working class - his father was a tanner - and he was one of four siblings. When he was thirteen the Averys moved to Wilson Station, Connecticut.

Steeplechase exemplifies Avery's early work and pays homage to the city he made his home. As his wife Sally explained, "The subway fare to Coney Island was five cents; with...our sketchbooks in our knapsacks, we could spend a fascinating holiday at the beach ."

Steeplechase was one of the three amusement parks built on Coney Island, as well as the longest-lasting one. Avery paints it as a slice-of-life, with bathers, families, and tourists populating the foreground. In the background is a tall wooden roller-coaster, a large sign advertising the park, and a covered carousel dotted with bright lights. Though he uses tones of deep gray and blue in the sky and muted pale gray for the beach itself, this is not a melancholy image; rather, it is one of joie de vivre, of delight in the city's leisure offerings even on a cloudy day.

Critics often deem Avery's work a fusion of the traditional and the modern, and this work exemplifies that assessment. The depiction of an urban scene is reminiscent of American painters such as Georgia O'Keeffe, John Sloan, and Edward Hopper, but like O'Keeffe, who heavily abstracted her work, as well as Arthur Dove, Avery deviates from realism to focus more on aesthetics than mimesis. The human figures are not proportionate, perspective is off, shapes are flat. Like both European and American modernists, Avery seeks to, as critic Hilton Kramer explains, "emphasize the essentially flat, two-dimensional nature of the painting surface " and explore the way color and light create atmosphere, mood, and allusion.

In this portrait of his wife Sally, which she considered one of her favorites, Avery's signature style of flat, abstracted shapes and effusive color is on full display. Sally sits perched on a small stool against a background of creamy blue-green. Her attire is vibrant - a crimson skirt, a yellow blouse, a violet sweater flecked with red, and a mauve hat perched jauntily on her head - and her face is slightly tilted, staring out at the viewer with a content and cerebral gaze. Though the colors are lifelike enough, Sally's facial features are simplified, her figure is attenuated and abstracted, and the image is totally flat, lacking dimension or modeling.

Artist's Wife is certainly a portrait, but like modernist master Henri Matisse, whom Avery admired greatly and was compared to often (though Sally herself said it best when she succinctly stated the major difference between the two: "Matisse was a hedonist and Milton was an ascetic "), the focus here is more on color and shape rather than the depiction of an actual likeness. Avery, as a representative for DC Moore Gallery noted, "[had] an independent vision in which everything extraneous was removed and only the essential components were left," and was aptly lauded for his "chromatic harmonies of striking subtlety and invention ." Avery may have modeled this work after a sketch from life he'd made of Sally, but as she explained, he was "particularly intrigued by the color arrangements which were tender and striking at the same time ."

Avery's paintings from the 1940s retained and expanded upon his visual vocabulary of saturated hues, robust shapes, and flat, abstracted subject matter. Here he paints Red Rock Falls, a popular destination in Glacier National Park, Montana, in perhaps the least representational terms for what is ostensibly a landscape painting. The river is two painted swathes of cream and lavender flowing from the upper middle part of the canvas. It divides the hills around it, which are rendered in hues of scarlet, lilac, and earthy brown and green. The sky, occupying a small strip of the top part of the canvas, is a sensuous pastel pink. A closer look yields crosshatched brushstrokes in faded gold on some of the cliff faces.

Without the title to guide the viewer, Red Rock Falls appears almost completely abstract. Critic James Panero wrote that every time he looks at the painting, "[It] seems simple, but it refuses to give up its secrets ." This is a painting that necessitates a close viewing even as its simplicity seemingly belies that need. Like early Abstract Expressionist Hans Hofmann, Avery plays with painted shapes and explores how their placement and juxtaposition of color creates a push-pull effect. Panero also notes, "[Its] ideal of interlocking shapes and colors...allows for a special form of dynamism ." Indeed, the painting resembles a jigsaw puzzle, which is perhaps Avery's witty way of reminding his viewer that the way any image on a canvas comes together is through both the eye and the mind.