Born: December 8, 1886
Guanajuato, Mexico
Died: November 24, 1957
Mexico City, Mexico
Mexican Muralism
Social Realism
Main
Biography
Artworks
When art is true, it is one with nature. This is the secret of primitive art and also of the art of the masters—Michelangelo, Cézanne, Seurat, and Renoir. The secret of my best work is that it is Mexican..

... (Cubism) was a revolutionary movement, questioning everything that had previously been said and done in art. It held nothing sacred. As the old word would soon blow itself apart, never to be the same again, so Cubism broke down the forms as they had been seen for centuries, and was creating out of the fragments new forms, new objects, new patters and—ultimately—new worlds.

All inner doubt, the conflict that had so tortured me in Europe, had disappeared. I painted as naturally as I breathed, spoke or sweated. My style was born like a child, in a moment, with the difference that this birth took place at the end of a painful, 35-year gestation.

The marching mass... had the floating motion of a snake, but it was more awesome... At the head of this winding, undulating creature mass was a group in the form of an enormous locomotive. A big red star and five picks were over the "cylinder" of the "boiler". The "headlight" was an enormous inscription between two flags: THE UNIONS ARE THE LOCOMOTIVES MOVING THE TRAIN OF THE REVOLUTION. THE CORRECT REVOLUTIONARY THEORY IS THE STEEL TRACK.

Diego Rivera and his fraternal twin brother (who died at the age of two) were born in 1886 in Guanajuato, Mexico. His parents were both teachers; his mother was a devoted Catholic mestiza (part European, part Indian) and his father, a liberal criollo (Mexican of European descent). Diego's exceptional artistic talent was obvious to his parents from an early age, and they set aside a room in the house for him in which he painted his first "murals" on the walls. When Diego was six, his family moved from Guanajuato to Mexico City, to avoid the tensions caused by his father's role as co-editor of the opposition newspaper El Democrata. Once in Mexico City, his mother decided to send Diego to the Carpantier Catholic College.

By the age of ten, Rivera decided he wanted to attend art school, despite his father's desire that he pursue a military career. By the age of twelve, Rivera was enrolled full-time at the San Carlos Academy of Fine Arts, where he received training modeled on conservative European academies; one of his painting teachers had studied with Ingres, and another required Rivera to copy classical sculpture. Trained in traditional techniques in perspective, color, and the en plein air method, Rivera also received instruction from Gerardo Murillo, one of the ideological forces behind the Mexican artistic revolution and a staunch defender of indigenous crafts and Mexican culture. With Murillo's support, Rivera was awarded a travel grant to Europe in 1906.

In Spain, Rivera studied the work of El Greco, Velazquez, Goya, and the Flemish masters that he saw in the Prado Museum, and which provided him with a strong foundation for his later painting. At the studio of the Spanish realist painter Eduardo Chicharro, Rivera became acquainted with the leading figures of the Madrid avant-garde, including the Dada poet Ramon Gomez de la Serna and the writer Ramon Valle-Inclan.

In 1909 Rivera traveled to Paris and Belgium with Valle-Inclan, where he met the Russian painter Angelina Beloff who would be Rivera's partner for twelve years. Returning to Mexico City in 1910, Rivera was offered his first exhibition at the San Carlos Academy. Rivera's return coincided with the onset of the Mexican Revolution, which lasted until 1917. Despite the political upheaval, Rivera's exhibit was a great success, and the money earned from the sale of his work enabled him to return to Europe.

Back in Paris, Rivera became a fervent adherent of Cubism, which he regarded as a truly revolutionary form of painting. However, Rivera's difficult relationships with the other members of the movement came to a tumultuous end following a violent incident with the art critic Pierre Reverdy, resulting in a definitive break with the circle and the termination of his friendships with Picasso, Braque, Juan Gris, Fernand Leger, Gino Severini, and Jacques Lipchitz.

Rivera subsequently shifted his focus to the work of Cézanne and Neoclassical artists such as Ingres, as well as a rediscovery of figural painting. Receiving another grant to travel to Italy to study classical art, Rivera copied Etruscan, Byzantine, and Renaissance artworks, and developed a particular interest in the frescoes of the 14th and 15th centuries of the Italian Renaissance. In 1921, following the appointment of Jose Vasconcelos as the new Mexican Minister of Education, Rivera returned to his home country, leaving behind his partner, Angelina Beloff, as well as Marevna Stebelska, another Russian artist, with whom Rivera had a daughter, Marika, in 1919.

Rivera returned to Mexico with a reawakened artistic perspective, deeply influenced by his study of Classical and ancient art. There, he was afforded the opportunity to visit and study many pre-Columbian archaeological sites under the auspices of the Ministry of Education's art program. Yet his first mural painting, produced for the National Preparatory School and entitled Creation(1922), shows a strong influence of Western art. Rivera soon became involved with local politics through his membership in the Revolutionary Union of Technical Workers and his entry into the Mexican Communist Party in 1922. At this time, he painted frescoes in the Ministry of Education in Mexico City and the National School of Agriculture in Chapingo. During the latter project, he became involved with the Italian photographer Tina Modotti, who had modeled for his murals; the affair prompted him to separate from his wife at the time, Lupe Marin. 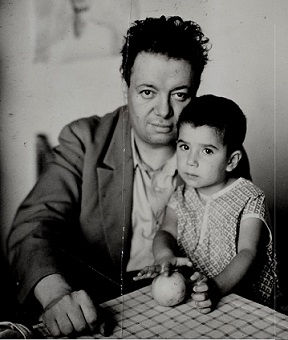 In 1927, Rivera visited the Soviet Union to attend the celebrations of the tenth anniversary of the October Revolution, an experience he found extremely inspiring. He spent nine months in Moscow, teaching monumental painting at the School of Fine Arts. Upon his return to Mexico, he married the painter Frida Kahlo, who was twenty-one years his junior, and became the director of the Academy of San Carlos. His radical ideas about education earned him enemies among the conservative faculty and student body; at the same time, he was expelled from the Communist Party for his cooperation with the government. Politically cornered, Rivera found support in the American ambassador to Mexico, Dwight W. Morrow, who commissioned him to paint a mural in the Cortes Palace in Cuernavaca depicting the history of that city. A great admirer of Rivera's work, Morrow offered the artist the opportunity to travel to the United States, all expenses paid. Rivera remained in the U.S. for four years. There, the always-prolific artist worked around the clock, painting murals in San Francisco, New York, and Detroit, celebrating the powerful forces of unions, education, industry, and art. In New York, he met with enormous popularity (his one-man show at The Museum of Modern Art had fifty-seven thousand visitors) as well as controversy (some of his murals were threatened with physical harm). Rivera's American adventure ended in 1933, when John D. Rockefeller, Jr., ordered the destruction of the mural he had commissioned for the lobby of Rockefeller Center, Man at the Crossroads, because of both Rivera's unwillingness to eliminate the portrait of Lenin and for what the Rockefeller family regarded as an offensive portrait of David Rockefeller.

After Rivera returned to Mexico, he and Kahlo shared a house-studio in a beautiful Bauhaus-style building in Mexico City that can still be visited today. From 1929 until 1945, Rivera worked on and off in the National Palace, creating some of his most famous murals there. In 1937, he and Kahlo helped Leon Trotsky - a major Russian Communist leader - and his wife obtain political exile; the Trotskys lived with Rivera and Kahlo for two years in the "Blue House" in the suburb of Coyoacan. Two years later, Rivera and Kahlo divorced, although they remarried a year later in San Francisco, while Rivera was working for the Golden Gate International Exposition. The two had a tremendously passionate, and an extremely tumultous relationship - one that can easily extrapolated by viewing her very personal artworks. The couple would ultimately remain together until Kahlo's death in 1954.

During his last years, Diego continued to paint murals, sometimes working on portable panels. He also produced a large number of oil portraits, usually of the Mexican bourgeoisie, children, or American tourists. These works are not always remarkable, and they are often infused with a kitschy aesthetic reminiscent of Pop art. However, they were very successful during his lifetime, and provided a way for the artist to acquire more pre-Columbian objects for his spectacular collection. Today, his collection is housed in the Anahuacalli Museum, a building inspired by the Great Temple of Tenochtitlan and designed by Rivera himself.

Widowed and already sick with cancer, Rivera married for the third time in 1955 to Emma Hurtado, his art dealer and rights holder since 1946. Following a trip to the Soviet Union made in the hope of curing his cancer, Rivera died in Mexico in 1957 at age seventy. His wish to have his ashes mingled with those of Kahlo was not honored, and he was buried in the Rotunda of Famous Men of Mexico.

The Legacy of Diego Rivera

Rivera saw the artist as a craftsman at the service of the community, who, as such, needed to deploy an easily accessible visual language. This concept greatly influenced American public art, helping give rise to governmental initiatives such as Franklin Roosevelt's Federal Art Project of the Works Progress Administration, whose artists depicted scenes from American life on public buildings. With his socially and politically expansive artistic vision, narrative focus, and use of symbolic imagery, Rivera inspired such diverse artists as Ben Shahn, Thomas Hart Benton, and Jackson Pollock.