Born: c.1532
Cremona, Italy
Died: 16th November 1625
Palermo, Sicily, Italy
Mannerism
The Baroque
Main
Biography
Artworks
[Sofonisba Anguissola] has shown greater application and better grace than any other woman of our age in her endeavors at drawing; she has thus succeeded not only in drawing, coloring and painting from nature, and copying excellently from others, but by herself has created rare and very beautiful paintings.
Giorgio Vasari
She executed by herself very rare and very beautiful paintings; wherefore she well deserved that King Philip of Spain, having heard of her abilities and merits from the Duke of Alba, should have sent for her and had her conducted honorably to Spain, where he keeps her with a rich allowance in the Queen's retinue, to the admiration of the whole court which admires Sofonisba's excellence as something miraculous.
Giorgio Vasari
Thanks for the "honorable and thoughtful affection that you have shown to Sofonisba, my daughter, to whom you introduced to practice the most honorable art of painting.
Letter from Sofonisba's father to Michelangelo
I sent it (Sofonisba's drawing) to you with this one (Michelangelo's Cleopatra), and I believe that it may stand comparison with many other drawings, for it is not simply beautiful, but also exhibits considerable invention
In a letter to Cosimo de' Medici from Michelangelo's friend, Tommaso Cavalieri
I bring to your attention the miracles of a Cremonese woman called Sofonisba, who has astonished every prince and wise man in all of Europe by means of her paintings, which are all portraits, so like life they seem to conform to nature itself. Many valiant [professionals] have judged her to have a brush taken from the hand of the divine Titian himself; and now she is deeply appreciated by Philip King of Spain and his wife who lavish the greatest honors on the artist.
In Libro de Sogni by Lomazzo, (1564), an imagined conversation between Leonardo da Vinci and the Ancient Greek painter, Phidias
•
•
•
•
•

Born into the minor nobility, Sofonisba was the oldest of six daughters and one son. Growing up in her native Cremona, a northern Italian city then under Spanish dominion, Sofonisba developed under the careful guidance of her ambitious and erudite father. Following an Anguissola family tradition, her parents, Amilcare and Bianca (née Ponzone), gave her an ancient Carthaginian name to emphasize their ancient noble roots and possibly because of their allegiance to the Spanish king. Amilcare also gave her an extensive humanist education as was expected of all elite children during the Renaissance. This classical education would have included studying Latin, Ancient Greek and Roman writers, painting and music, as well as contemporary humanist authors. Nonetheless, her level of learning seemed to people who met her to be truly exceptional, as was her ability in painting. In providing this education above and beyond expectations, Amilcare perhaps sought to increase her chances of an advantageous marriage when she came of age - after all, he himself had made such convenient marriage to Bianca, who was slightly higher than him in social rank. At the very least, he wished to give Anguissola some degree of independence, as some of his wealthier relatives had done for their daughters.

While members of the nobility were expected to have knowledge of the arts, it was not conventional for them to pursue the arts professionally. In a radical move, Amilcare arranged specialized training in painting for Anguissola and her sister Elena. They joined the household of Bernardino Campi as apprentices in 1545. Campi was a young Mannerist artist who had met Giulio Romano while working in Mantua; he had gained quick fame for his elegant compositions upon his return to Cremona. In his workshop, Anguissola learned to copy from established masters, such as Parmigianino, although she preferred to paint from life.

Although it is hard to pinpoint for how long Anguissola trained in Milan in 1549, Anguissola continued her training with another important Cremonese painter, Bernardino Gatti (Il Sojaro). Under his tutelage she became further acquainted with the painting styles of Correggio and Parmigianino, and gained a taste for everyday scenes. It is very likely that Anguissola also collaborated in some of his commissions, the paintings she produced in the early 1550s show a sense of innovation that became one of her hallmarks: imbuing portraits with narrative and intellectual nuances.

It was this type of composition that would interest one of the legendary masters of the Italian Renaissance, Michelangelo Buonarroti. While she doesn't appear to have been apprenticed to him, she corresponded with him through letters. Michelangelo advised and critiqued her work, which helped her develop her skills as a painter. After receiving a drawing of a smiling girl teaching an elderly woman how to read, the master responded that a drawing of a crying boy would perhaps be more challenging. In response, Anguissola sent him Boy Bitten by a Crawfish (1554), which highlights not only the draftsmanship which Michelangelo so admired but also her sense of humor. The work is an intimate portrait of Anguissola's young brother, Asdrubale, being comforted by the youngest sister, Minerva, who smiles at the crying boy. It is thought that this sketch inspired the important Baroque artist Caravaggio to paint his Boy Bitten by a Lizard (1594-95). 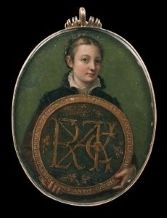 In the continuing quest to secure Anguissola a good position, Amilcare introduced her to various courtiers and artists in Northern Italy, advertising her abilities and extending her artistic education. In 1556, Anguissola painted a portrait of Giulio Clovio, a renowned miniaturist, in gratitude for the advice he had given her. Her immediate success in this medium - then very popular - is seen in a small self-portrait probably completed that same year. By 1559, her fame as a female portrait painter had spread outside Italy, and King Philip II of Spain requested that she become a lady-in-waiting to his young queen, Elisabeth of Valois. During her time at the Spanish court, Anguissola tutored the queen in drawing and painting. She also completed a portrait of the queen at the request of Pope Pius IV, and numerous full-size and miniature portraits of Spanish royals and courtiers, inventing new ways to show her subjects formally but with the life-like quality that gained her praise from Italian and Spanish art writers and collectors.

The queen and the painter became close friends. When Elisabeth died in 1568, other members of her entourage returned to France but Anguissola remained in Spain at the king's request to educate the young infantas, Isabel Clara Eugenia and Catalina Micaela. In the meantime, Philip arranged a noble marriage for Anguissola and provided a generous dowry to ensure the stability of her future and perhaps to protect her painting career. In 1571, she married the Sicilian Fabrizio de Moncada, regent of Paternò, and they returned to his native Sicily. The rich gifts she had received as compensation for her paintings were listed in her marriage contract, demonstrating her immense success at court. Little is known about Anguissola's activities while married to Moncada, but she continued to paint and tutor others. At his death in 1579, she gifted a local church with an altarpiece.

The artist then decided to return to northern Italy, perhaps to be near her family. On the boat journey up the Italian coast, Anguissola met and fell in love with the ship's captain, Orazio Lomellino. Although he was a nobleman, her family did not approve of the marriage (even asking the duke of Florence, Francesco I de' Medici, to intercede). King Philip, however, approved of the marriage by gifting her with yet another annual rent. The artist served as his agent in Genoa, recommending art and artists for his new palace at El Escorial.

Anguissola lived in Genoa for 35 years, where she continued to draw attention as a celebrity. The merchant families of the city were becoming wealthier, building great palaces and commissioning art. She hosted intellectual gatherings and became friends with up-and-coming artists, including Luca Cambiaso and Bernardo Castello. She produced religious paintings that included dramatic light effects, and new portraits of the grown infantas, who visited her on their way to meet their own husbands in Savoy and Vienna. In 1615, Anguissola and Orazio moved to Palermo, where he conducted most of his business. Like in Genoa, numerous artists sought her advice. In her later years she was unable to paint owing to a progressive blindness. Nonetheless, she became a great patron of the arts, funding other young artists and helping them develop their careers. In 1624, the year before Anguissola's death, the Dutch painter, Anthony van Dyck visited her. He was only 24, but already a star in the art world. He painted a soft, intimate portrait of her as a 92-year-old woman, with a pale forehead, a downturned mouth and watery eyes. Despite her age, van Dyck claimed that Anguissola was still very mentally sharp, albeit her eyesight had weakened. As he sketched her, they conversed on the 'true principles' of painting, and van Dyck later claimed that this conversation taught him more about painting than anything else in his life.

The Legacy of Sofonisba Anguissola

Since her early family portraits, Anguissola's works were permeated with elements of storytelling that elevated regular, everyday scenes into witty visual plays. Her ability to represent a believable likeness imbued with the personality of the sitter later became one of the hallmarks of Baroque portraiture.

In Spain, Anguissola developed a nuanced yet clever style of portraiture that suited her royal patrons' need for propaganda, combining the formal German and Venetian styles established by Antonis Mor and Titian. Her formal portraits influenced other artists there. Many of Anguissola's Spanish works perished in a fire at the Royal Alcázar of Madrid in 1734. However, her works had been so successful that even while she resided at court other artists were ordered to make copies of her paintings. Foreign artists such as Peter Paul Rubens also copied them because they recognized their superiority, and thus her innovations seeped into the genre.

Anguissola's success may have inspired a larger number of female artists than before, including Lavinia Fontana and Artemisia Gentileschi, who ignored social expectations of female domesticity and female seclusion to the private, domestic sphere.

Perhaps owing to her gender, after her death her reputation died until she was rediscovered in the 1970s by Western feminists. While it would be incorrect to assign Anguissola the title of feminist, her success demonstrated that her talent, work and reputation were equal, if not superior, to those of any other artists. As scholars have continued to unveil details of her life and production, Anguissola has provided scholars and artists with a key to rethink how we understand the period in which she lived.

Edited and revised, with Synopsis and Key Ideas added by Alejandra Gimenez-Berger