Started: 1917
Ended: 1931
Main
History
Artworks
We speak of concrete and not abstract painting because nothing is more concrete, more real than a line, a color, a surface.

While the expressive possibilities of Neoplasticism are limited to two dimensions (the plane), Elementarism realizes the possibility of plasticism in four dimensions, in the field of time-space.

Why should something that no one finds strange in music, be impossible in the art of painting/sculpture? By comparing works of art that do not represent an object, is in our experience, the most fruitful way of exercising our receptivity for them.

The three principal colors are essentially yellow, blue, and red. They are the only colors existing ... Yellow is the movement of the ray (vertical) ... blue is he contrasting color to yellow (horizontal firmament) ... red is the mating of yellow and blue.
M. H. J. Schoenmaekers
There is an old and a new consciousness of the age. The old one is directed towards the individual. The new one is directed towards the universal. The struggle of the individual against the universal may be seen both in the world war and in modern art.
Theo van Doesburg, from his 1918 manifesto
•
•
•
•
•

In 1917, Theo van Doesburg founded the contemporary art journal De Stijl as a means of recruiting like-minded artists in the formation of a new artistic collective that embraced an expansive notion of art, infused by utopian ideals of spiritual harmony. The journal provided the basis of the De Stijl movement, a Dutch group of artists and architects whose other leading members included Piet Mondrian, J. J. P. Oud and Vilmos Huszar. Adopting the visual elements of Cubism and Suprematism, the anti-sentimentalism of Dada, and the Neo-Platonic mathematical theory of M. H. J Schoenmaekers, a mystical ideology that articulated the concept of "ideal" geometric forms, the exponents of De Stijl aspired to be far more than mere visual artists. At its core, De Stijl was designed to encompass a variety of artistic influences and media, its goal being the development of a new aesthetic that would be practiced not only in the fine and applied arts, but would also reverberate in a host of other art forms as well, among them architecture, urban planning, industrial design, typography, music, and poetry. The De Stijl aesthetic and vision was formulated in large response to the unprecedented devastation of World War I, with the movement's members seeking a means of expressing a sense of order and harmony in the new society that was to emerge in the wake of the war. 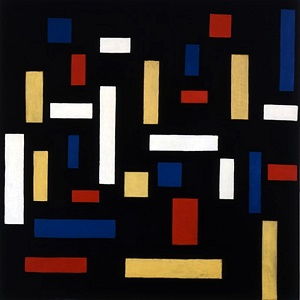 De Stijl was the first-ever journal devoted to abstraction in art, although the movement's artists were not the first to practice abstract art; other painters, perhaps most notably Wassily Kandinsky, Kazimir Malevich and Hans Arp, had earlier created nonobjective art, often incorporating geometric forms in their work. But the artists and architects associated with De Stijl - painters such as Mondrian, van Doesburg and Ilya Bolotowsky, and architects such as Gerrit Rietveld and J. J. P. Oud - adopted what they perceived to be a purer form of geometry, consisting of forms made up of straight lines and basic geometric shapes (largely rendered in the three primary colors); these motifs provided the fundamental elements of compositions that avoided symmetry and strove for a balanced relationship between surfaces and the distribution of colors. In Neo-Plasticism in Pictorial Art, Mondrian explained: "As a pure representation of the human mind, art will express itself in an aesthetically purified, that is to say, abstract form. The new plastic idea cannot, therefore, take the form of a natural or concrete representation."

Neo-Plasticism refers to the painting style and ideas developed by Piet Mondrian in 1917, promoted by De Stijl. Denoting the "new plastic art," or simply "new art," the term embodies Mondrian's vision of an ideal, abstract art form he felt was suited to the modern era. Mondrian's essay Neo-Plasticism in Pictorial Art, which set forth the principles of the concept, was published in twelve installments of the journal De Stijl in 1917-18. Mondrian described Neo-Plasticism as a reductive approach to artmaking that stripped away traditional elements of art, such as perspective and representation, utilizing only a series of primary colors and straight lines. Mondrian envisioned that the principles of Neo-Plasticism would be transplanted from the medium of painting to other art forms, including architecture and design, providing the basis of the transformation of the human environment sought by De Stijl artists. In Mondrian's words, a "pure plastic vision should build a new society, in the same way that in art it has built a new plasticism."

The concept of Neo-Plasticism was largely inspired by M. H. J. Schoenmaekers's treatise Beginselen der Beeldende Wiskunde (The Principles of Plastic Mathematics), which proposed that reality is composed of a series of opposing forces - among them the formal polarity of horizontal and vertical axes and the juxtaposition of primary colors.

Neo-Plasticism was later promoted by the movement Cercle et Carre and three issues of its eponymous journal appearing in 1930. Following Mondrian's visit to the U.S. in 1940, the style spread to the U.S., where it was taken up by various American abstract artists.

While only horizontal and vertical lines were to be utilized in Neo-Plasticism, in 1925, van Doesburg developed Elementarism, which attempted to modify the dogmatic nature of the style by introducing the diagonal, a form that for him connoted dynamism - "a state of continuous development." In "Painting and Sculpture: Elementarism (Fragment of a Manifesto)," published in De Stijl in 1927, he wrote: "If all our physical movements are already based upon Horizontal and Vertical, it is only an emphasis of our physical nature, of the natural structure and functions of organisms if the work of art strengthens - although in an 'artistic manner' - this natural duality in our consciousness."

Prizing horizontal and vertical lines for their connotation of stability, Mondrian strongly disagreed with van Doesburg's newfound emphasis on the diagonal--a disagreement that famously prompted Mondrian to secede from De Stijl shortly thereafter. For Mondrian, van Doesburg's introduction of the diagonal amounted to artistic heresy; in Mondrian's view, the Elementarist diagonal repudiated De Stijl's efforts to fully integrate all the elements of the painting by creating tension between the composition and the picture plane. 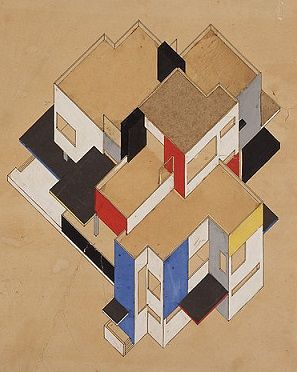 De Stijl-inspired architecture, particularly by Rietveld and Oud, was built in the Netherlands throughout the 1920s, all of which, interestingly enough, seemed to defy van Doesburg's theory of Elementarism, instead utilizing clearly defined horizontal and vertical lines. De Stijl also had a major influence on Bauhaus architecture and design; several members of De Stijl taught at the Bauhaus, perhaps most importantly van Doesburg, who lectured there in 1921-22. De Stijl's geometric visual language, along with its architectural concepts such as form following function and the emphasis on structural components, would reverberate in Bauhaus architectural practice, as well as the global idiom known as the "International Style."

With Theo van Doesburg's death in 1931, De Stijl lost its leader, and soon after faded from existence. However, the movement's key ideas of pure geometric abstraction and the relationship of form and function were maintained by many following van Doesburg's death, and represent a fundamental contribution to modern and contemporary art, design, and architecture. Many of Rietveld's buildings, for example, survive the longevity of the De Stijl movement, and inspired a great many 20th-century architects, among them Mies van der Rohe. Beyond the realm of architecture, the pared-down De Stijl aesthetic influenced many subsequent artists and designers of the 20th century and beyond, among them the Abstract Expressionists Mark Rothko and Barnett Newman, Hard-edge painters Frank Stella and Frederick Hammersley, and Minimalists Donald Judd and Dan Flavin.