Born: June 6, 1599
Seville, Spain
Died: August 6, 1660
Madrid, Spain
The Baroque
Main
Biography
Artworks
I would rather be an ordinary painter working from life than be the greatest copyist on earth.

Raphael, to be plain with you, for I prefer to be candid and outspoken, does not please me at all...It is Titian that bears the banner.

A human will only grasp the realm of a parent's love when he experiences for himself the like.

Diego Rodriguez de Silva y Velazquez was the first of six children born to Juan Rodriguez and Jeronima Velazquez in Seville, Spain. He received fine training in religion, languages, and philosophy from his parents. His father recognized his son's early talent in drawing when his copybooks always turned into sketchbooks and arranged an apprenticeship for Velazquez to study with Francisco de Herrera the Elder. The master painter was considered to be the creator of the Spaniards' national style. When Velazquez was 12 years old, he studied under the accomplished Spanish painter, Francisco Pacheco, who taught him technical drawing and painting as well as literature and philosophy. The biographer Karl Justi described Pacheco as not only a painter but also a poet, biographer, and art theorist whose "...studio was a formal academy of the most cultured Sevillians and strangers..." Pacheco also had influential contacts in the Spanish royal court, which was of great value to his students, many of whom had ambitions to garner esteemed positions as court artists.

At the time, the talent of painters was most often employed to depict scenes from great religious and historical narratives, or to create portraits for royal and wealthy patrons. But even as a young painter Velazquez was drawn to paint all types of people and situations. He was sometimes criticized for his works that showed common people engaged in domestic tasks. However, Pacheco, in his 1649 book Lives of the Painters, recalls Velazquez as saying, "...I would rather be first painter of coarse things than second in higher art..." Pacheco was ultimately impressed by Velazquez's virtue, integrity, disposition, and talent, and admired that, "...he worked from life, making numerous studies of his models in various poses and thereby gained certainty in his portraiture."

After being accepted into the Painter's Guild of St. Luke in 1617, at the age of 18, Velazquez set up his own studio and married Pacheco's daughter, Juana. By the early 1620s, Velazquez had established his position and reputation in Seville. He started a family and continued to paint historical scenes, portraits, mythological, and sacred subjects.

In December 1622, the favorite court painter of young King Philip IV died and the King's minister, Count-Duke of Olivares, summoned Velazquez for the vacant position. Within two years, Velazquez was paid to move his family to Madrid, which became his home for the rest of his life. He was admitted to the royal service with a monthly salary, medical benefits, lodging, and payment for all assigned paintings; his life and career were well supported.

Although Velazquez was deeply embedded in Baroque tradition, his work exhibited points of departure that would eventually come to differentiate him from the other court painters of the time and deposit him into the realm of fiercely individualistic artists. Instead of the typical glamorization of his subjects, he painted with an interest in naturalism - a direct and precise realism that two hundred years later, after the advent of photography, might have been deemed photorealistic. He developed his own nature and principles of art to show people and situations as they authentically were, but also used compositional techniques that drew the eye toward parts of the work that he wished to emphasize. He would alternate the use of freestyle brushstrokes between loose or tight to conjure atmosphere. He had a flair for using qualities of oil point, the effects of light and dark, and color to maximize the way a human eye created a visible world and would experience a canvas. He seldom used lines in his finished work, his forms became defined by patches of hue, and the contrasts between highlight and shadow. 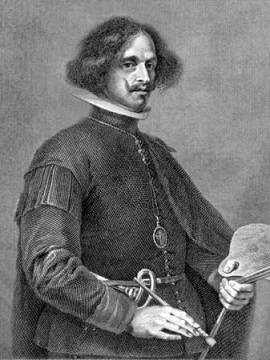 In 1627, King Philip announced a competition for the most accomplished Spanish painters. The subject of the paintings was deemed the historical expulsion of the Moors. Velázquez won but his painting was destroyed in 1734 by a palace fire. However, recorded descriptions of it explain a scene of Philip III pointing his baton at a crowd of people being led away by soldiers, while Hispania, the female personification of Spain, sits in calm repose. Velázquez was appointed gentleman usher as his reward, and received a daily allowance and an additional payment each year for dress.

In 1628 he received a visit from the older, renowned Flemish Baroque artist, Rubens, who spent six months at the court in Madrid. Velázquez and Rubens talked and worked together during this time and developed a deep mutual respect for each other. Rubens urged Velazquez to visit Italy where he believed real art began.

Velázquez made his first visit to Italy in 1629 with the permission of King Philip IV. He went to Genoa and Venice where he saw the work of Titian, whom he had admired since the days of his apprenticeship in Seville and whose influence upon his work was of dominance. He also visited Florence and Rome where the works of many masters were available for him to study. He stayed in Rome for almost a year, where he copied the master paintings and worked on his own canvases. Back in Madrid, Velázquez continued in the employment of the Spanish Court. By 1634, he was working on decorating the Buen Retiro palace. Velazquez painted the scene of the ceremonious handing over of the keys to the fortress of Breda. That painting has been described as a superlative historical piece of work, perhaps the best in Western Europe. 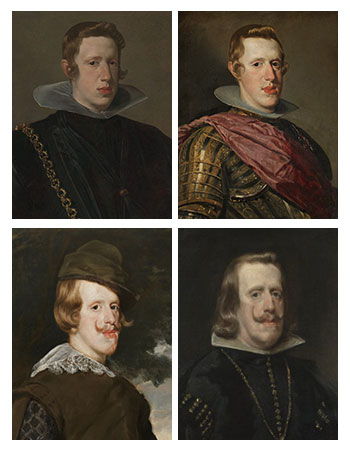 Upon returning to Madrid, King Philip IV made Velazquez Supreme Court Marshal, an appointment that enabled him to expand his art workshop. He also took on many assistants and pupils, who unfortunately were not of the same artistic caliber. King Philip had married Mariana of Austria after the death of his first wife, whom Velázquez now painted in many variations. Yet far from indicating any decline due to these tasks, his works of this period are amongst the highest examples of his style.

Velazquez's last major work was a group portrait of the Spanish Royal Family titled Las Meninas (1656). Velázquez died in Madrid, in the palace where he spent so much of his time, in August 1660.

The Legacy of Diego Velazquez Until the 19th century, Velazquez's work was little known outside of Spain. In 1828, the Scottish artist, Sir David Wilkie, wrote from Madrid that he felt Velazquez was a new presence and power in art. He also sensed a relationship between Velazquez and the British school of portrait painters, especially Sir Henry Raeburn. He appreciated the modern impressions throughout Velázquez's work in both portraiture and landscape.

Velázquez is often named a key influence on the art of Édouard Manet and the Impressionists. Calling Velázquez the "painter of painters," Manet admired the bold combination of the free and loose brushstrokes that characterized his style even as he held true to his training in the Baroque academia of his contemporaries. Manet built upon Velázquez's motifs in his own art.

As a teenage art student at Madrid's Royal Academy of Fine Arts in 1897 and 1898, Picasso spent time in the galleries of the Prado, where he copied the works of Velazquez. Las Meninas was so influential that it led Picasso to recreate it 58 times in his late Cubist style in the 1950s.

The Surrealist painter Dalí was also inspired to develop his famous moustache after admiring that of Velazquez. He also reinterpreted Velazquez's painting in his 1960 work Portrait of Juan de Pareja, the Assistant to Velázquez. That same portrait inspired the 1965 novel I, Juan de Pareja by Elizabeth Borton de Treviño, which in 1966 was awarded The Newberry Medal, a children's literary prize.

In the end, Velazquez's greatest contribution to art was in his ability to respectfully toe the line between tradition and modernity in a way that sparked both lovers of art and other artists simultaneously. Bacon has described Velazquez's genius as such: "One wants to do this thing of just walking along the edge of the precipice, and in Velazquez it's very, very extraordinary that he has been able to keep it so near to what we call illustration and at the same time so deeply unlock the greatest and deepest things that man can feel."

In today's contemporary art spheres we continue to find Velazquez's lasting impressions. In 1985-86, French-Senegalese artist Iba N'Diaye restaged one of his portraits for the painting Juan de Pareja agresse par les chiens (Juan de Pareja menaced by dogs). The same painting inspired the central theme of the 2012 play Disgraced by Ayad Akhtar, in which a South Asian Muslim man is painted by his white wife in its style.