The exact date and place of Rublev's birth are unknown but it is likely he was born in the mid-to-late fourteenth century and was raised in the small town of Sergiev Posad near Moscow. It is a matter of historical record however that the Russia of the 1360s was a difficult and bloody country in which to live. Russia had been occupied by Tartar invaders who pillaged towns, monasteries and churches and took peasants into slavery, state control had been pushed back to the towns of Nizhniy Novgorod and Moscow, while the passage of fleeing people led to plagues in both cities during 1364 and 1366. In 1365, meanwhile, a fire had swept through Moscow destroying large parts of the city, taking many lives. These disasters were followed in 1371 by widespread famine, and soon thereafter, in 1378, Moscow was invaded by Lithuania's Prince Algirdas. There is no evidence to suggest that Rublev was directly affected by any of these events, but they do serve as a backdrop to the times in which he had grown up and possibly hint at his motivation to create the images of heavenly balance on which his legend is built.

It is fair to say that these were dark days for ordinary Russians, but the fact that Rublev has a surname, an endowment only possessed by nobility or dignitaries, suggests that his family enjoyed a level of wealth and status. Moreover, the name "Rublev" may have been an indicator of his family's trade: the name "Rublev" probably derives from the verb "rubit" (to cut wood) or from the noun "rubel" which is either a long wooden pole or a tool used by tanners. It is thought likely, too, that his Christian name was changed, with the name Andrei being bestowed on him only when he took his vows as a monk.

In a chronicle in 1408 Rublev is described as both an artist and a "faster". Ascetism was a common practice among Russian Orthodox priests at the time and part of a monk's calling was to fast regularly. It is not known for certain where and when he took holy orders but it was likely to be The Holy Trinity Cathedral of St Sergius where he spent many years. It is possible too that at the time of his arrival at Trinity, the Father Superior Sergius of Radonezh himself may have been the hegemon, though is seems more likely that he was a monk under Nikon of Radonezh, Sergius's immediate successor. Whether or not Rublev arrived before or after Sergius' death (in 1392) however, the elder monk will have had a significant impact on Rublev's education. Indeed, Sergius was one of the most significant monastic reformers in Russian history and became a patron saint when the Russian Orthodox church canonised him in 1452. At the time of Rublev's monastic career his influence would have been all-pervasive. Sergius of Radonezh built the original wooden church of the trinity, with one small cell in which to live, during the early 14th Century with the help of an elder brother. Alone in the woods the siblings proceeded to live a life of ascetic piety and peacefulness, subsisting solely on what they could grow themselves. Though his brother would move on, news of Sergius's lifestyle quickly spread among monks in the surrounding area and very soon many had joined him, building basic living cells of their own. The site expanded quickly and his disciples left to spread word of his way of life to other monasteries thereby swiftly changing the running of monasteries in the wider surroundings. This quiet, pensive attitude to worship that the ascetic monks adopted permeated deeply during Rublev's religious education and indeed shines through in his art later in life.

It is generally agreed that Rublev honed his artistic skill under the tutelage of Theophanes the Greek, a great muralist and iconographer in the Byzantine tradition. This supposition is based on the documentary evidence that (in reverse order) Rublev, Prokhor the Elder from Gorodets and Theophanes form the list of artists who provided frescoes and icons for the Cathedral of The Annunciation in The Kremlin in 1405. Though he was the junior (in rank and age) member of the team, the very fact that Rublev's name is recorded on such a prestigious commission indicates that he had already achieved a sound level of status.

The wooden Cathedral burnt down and was replaced in stone some years later, but the icons still remain, and though none of the work is signed, attributions have been made and largely agreed upon by art historians as to which man painted which icon. By comparing Theophanes's and Rublev's images, one finds that their religious outlooks differed quite considerably; in contrast to Rublev's heavenly optimism, Theophanes's overwrought and tragic images sat much more comfortably within the general trajectory of Byzantine Christian painting. It is not known therefore if the two artists were close theological companions but there are, however, clear links between the styles of the two artists. 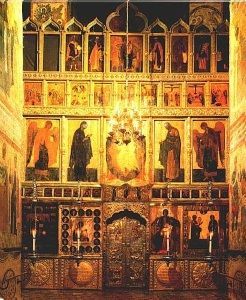 It is known that Theophanes the Greek moved to Novgorod in 1370 from Crimea. He was born and trained in art and philosophy in Constantinople and is described in contemporary accounts to be a very learned and thoughtful man. These qualities are evident in his work and can be seen thus as an influence on Rublev's own meditative approach to composition. Theophanes was a leader in both the Novgorod school of painting and, later, The Moscow School, and passed their developments and changes to the Byzantine tradition on to Rublev, who was to evolve them into a more distinctive and more self-confident Russian-national style.

In 1408 Rublev was commissioned to decorate the Assumption Cathedral in Vladimir with Daniil Cherny (amongst others). Cherny and Rublev became friends and colleagues and are thought to have worked closely together over the proceeding two decades. Indeed, when Trinity St Sergius burnt down during a Tartar raid in 1408, the two men were invited to decorate its stone replacement. The surviving Cathedral frescos represent a fragment of the Doomsday composition but analyses of the frescos - the rhythm and gracefulness of the lines - could only belong to the hand of Rublev. Indeed, his interpretation of the scene was quite atypical with the Byzantine preference for the theme of fear of damnation being overtaken by the theme of forgiveness and enlightenment. It is thought by many that Rublev also painted his great masterpiece, and only proven work, The Trinity, or The Hospitality of Abraham to display in the new cathedral. The dating of The Trinity is, however, unknown though is thought to have been painted either in 1411 or on completion of the holy building somewhere between 1425-27. In either case, the Trinity icon has come to symbolize a new (and lasting) apex in Russian culture. 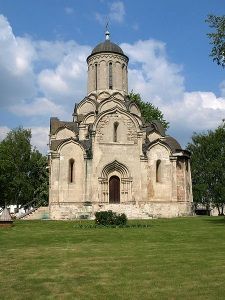 Following Cherny's death (he is buried at the St. Trinity monastery) Rublev moved to the Andronikov Monastery in Moscow where he painted the frescos, his last known works, for The Church of The Saviour. According to the letter of the saint Epiphanies the Wise, Rublev had worked as a labourer on the construction of the monastery while his frescos were painted between 1428 and his death in 1430. Today there is a museum in the monastery dedicated to Rublev.

The Legacy of Andrei Rublev

Though Rublev is now considered the greatest of all Russian medieval iconographers, and was probably well respected during his lifetime, he was not (re)discovered until the 20th Century when The Trinity was cleaned in 1904. His reputation grew to such an extent that by 1959 the Andronikov Monastery opened The Andrei Rublev Museum. His legend was further confirmed when the Russian Orthodox Church made Rublev a saint in 1988, the first Russian painter to be canonized. The church commemorates Rublev's life on 4 July.

Artistically, both the Moscow and Novgorod Schools of iconography have had huge impacts on modern art and Rublev as the leading light of the style especially. His minimal rhythmic approach to composition gave the abstract artists of the 20th century such as Constantin Brancusi, who, like Rublev, was driven by the search for the idealization of aesthetic form and the poetic evocation of spiritual thought, the starting points to explore the possibilities of pure non-figurative movement in their work. His mastery of color alongside spiritual symbolism inspired the work of Wassily Kandinsky, whose interest in Russian iconography is present throughout much of his work. Kandinsky claimed in Concerning the Spiritual in Art that "color is a power which directly influences the soul", an idea that, though claimed by Kandinsky over five hundred years later, is palpable in Rublev's work and that of subsequent iconographers. In 1966 Andrei Tarkovsky made a film based on Rublev's life and it is widely considered one of the greatest European art house films that succeeds in illustrating the pivotal role that Christianity and the art of Orthodox Iconography plays in Russia's self-image. Though he had little to work with by way of a recorded biography, Tarkovsky's three-hour-plus opus is generally considered an authentic representation of Rublev's life and of 15th century Russia. Indeed, Tarkovsky tells the story of Rublev's life through a series of "moments," a technique that pays homage to the iconographer's own method of working.