Born: February 9, 1932
Dresden, Germany
Capitalist Realism
Pop Art
Postmodernism
Main
Biography
Artworks
What I'm attempting in each picture is nothing other than this...to bring together in a living and viable way, the most different and the most contradictory elements in the greatest possible freedom.

Photography altered ways of seeing and thinking. Photographs were regarded as true, paintings as artificial. The painted picture was no longer credible; its representation froze into immobility, because it was not authentic but invented.

I want to leave everything as it is. I therefore neither plan nor invent; I add nothing and omit nothing. At the same time, I know that I inevitably shall plan, invent, alter, make and manipulate. But I don't know that.

Gray is the color.. the most important of all.. absent of opinion, nothing, neither/nor.

I'm still very sure that painting is one of the most basic human capacities, like dancing and singing, that make sense, that stay with us, as something human.

Every museum is full of nice things. That's the opposite of before. It was important things or serious things. Now we have interesting things.

I believe in painting and I believe in eating too. What can we do? We have to eat, we have to pain, we have to live. Of course, there are different ways to survive. But it's my best option.

I don't dare to think my paintings are great. I can't understand the arrogance of someone saying, 'I have created a big, important work.'

Gerhard Richter was born in 1932 in Dresden, Germany, during the rise of the National Socialist German Workers' Party, or the Nazi Third Reich. Notably, some of Richter's relatives were directly involved in the Nazi movement, namely his father, a schoolteacher, and an uncle. Richter's mother, the daughter of a concert pianist, encouraged her son's early talent for draftsmanship. In 1948, at the age of 16, Richter quit his formal education and took up an apprenticeship as a set painter for the theater. The wake of war proved traumatic for Richter: two of his uncles had been killed in action, and his father had lost his employment. This family turmoil, coupled with the artist's early artistic training under postwar communist-driven ideology, eventually led Richter to seek his creative inspiration in nature over any political or religious affairs or philosophies.

Beginning in 1951, Richter studied at the Kunstakademie, Dresden, where he painted murals and political banners commissioned by state-owned businesses. During this time, the East German communist regime imposed a Social Realist style on all practicing artists; this policy effectively turned art to the service of political propaganda. In keeping with this development, the government banned exhibitions of American Pop art and Fluxus. These circumstances severely limited Richter's fledgling artistic style, as he was instructed to paint only landscapes in a manner heavily informed by pastoral romanticism.

Richter married Marianne Eufinger in 1957, and the couple celebrated the birth of a daughter, Betty, in 1966. Two years later, during a visit to West Germany in 1959, Richter discovered the work of contemporary artists Jackson Pollock and Lucio Fontana. Pollock's uninhibited splashes of color across canvas had a profound impact on Richter, provoking him to reflect on his own artistic ideology. Indeed, Richter began to question how a realist style did not seem to capture the energy, sense of truth, and spirit of artistic liberation that he observed in the abstract work of his American and European contemporaries. Supposedly "realistic", his work seemed to fail to reflect the underlying, tumultuous nature of reality itself.

In 1961, just prior to the government's official completion of the Berlin Wall, Richter moved to Düsseldorf. Once again enrolling at the local Kunstakademie, Richter intended to work in a more uninhibited, avant-garde manner; in the process of rethinking his approach to art making, he purposely destroyed many of his early paintings from the 1950s and the 1960s.

While continuing to paint in a realist manner, around 1961, Richter began using photographs, projecting and tracing images directly onto the canvas. Richter believed that he was, as an artist, "not painting a particular person, but a picture that has nothing in common with the model." Thus while he painted individuals from photographs, Richter's replica images were often blurred and bore nothing distinctively identifiable about the subject, an effect that forced the viewer to consider the fundamental components of the painting itself, such as composition, color scheme, and so forth, rather than leaving the viewer to identify with, or be distracted by, a picture's implied content or its emotional element of "humanity." 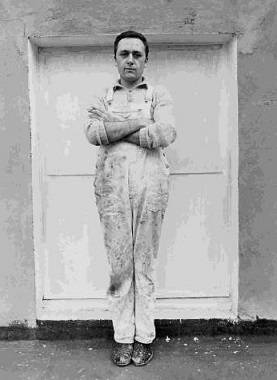 Eventually finding himself frustrated over whether to pursue abstraction or figuration, Richter decided to concentrate on the chance details that emerged from the painting process. Using the same method as employed in his representational paintings, Richter began blurring, scraping, and concealing various painted layers in his new canvases. In 1966, he created a series of grey paintings that featured compositional structure and paint application rather than realistic subject matter. Richter applied the paint in thick brushstrokes, or with rollers and an aggressive sweep of a squeegee (ironically, a tool commonly used for window cleaning and clarifying one's scope of vision). In this particular body of work, Richter minimized the visual impact of realist imagery in favor of a spontaneous, gestural illusion of space.

In 1971, Richter became a professor at the Kunstakademie, Düsseldorf. This marks the beginning of his "color chart" paintings, in which he systematically applied square hues of solid color to large canvases. During this time, Richter received wide criticism for his express refusal to be identified with a specific artistic movement, as well as for his work's apparent unwillingness to acknowledge various social and political issues pertaining to the WWII Nazi regime.

Richter embraced the title, Abstract Painting, in 1976, as a generic one for all his subsequent canvases, a move that effectively forced viewers to interpret a given work without explanation provided by the artist. One year later, Richter returned to figurative work in his Baader-Meinhof series, which chronicled the controversial death of a group of young German terrorists in a Stammheim prison. Photographs served as references as Richter painted the dead and captured the horrific vanity of the terrorists' actions. The blurred imagery of Richter's paintings might be said to parallel the unsolved mystery surrounding the inmates' sudden demise.

In 1983, Richter moved to Cologne with his second wife, contemporary sculptor Isa Genzken. The couple later divorced, and in 1995 Richter married Sabine Moritz, who gave birth to a son and a daughter. Richter continues to live in Cologne, while he also maintains his professorship at the Kunstakamedie, Düsseldorf.

During the 1980s and '90s, Richter achieved international celebrity for his series of entirely abstract paintings that, on first glance, would seem to carry on a tradition of Abstract Expressionism; nevertheless, on close examination of their dense surfaces, these color-resplendent works suggest that they have been calculated to refer only to themselves or their processes of production (i.e. in lieu of expressing any personal psychology of the artist himself). Sharing a typically postmodern attitude of skepticism toward all grand ambitions, Richter seems in this body of work to revel in his own ability to pack pigments in dense layers across the canvas, and then disturb the entire, quasi-archeological field by raking it laterally, as though the artist was mechanically plowing "intersections" where his own control of his materials gives way, in this place and that, to purely chanced textures and random coagulations of color. These "abstract pictures," as Richter titles them, ultimately seem to constitute isolated moments of pure visual pleasure.

The Legacy of Gerhard Richter Richter came of age as a painter at what was, for an artist, a very challenging moment in history, indeed, when both modern art and global politics had arrived at historic "milestones" in their respective development. Richter found a viable means for reconciling his long grounding in Social Realist painting with more conceptually challenging, avant-garde developments afoot in Europe and the United States. At a time when the "death of painting" was increasingly proclaimed by a new generation more interested in art's conceptual potential than with mastering long traditions of material craftsmanship, Richter demonstrated that painting could still powerfully question all images for their truth potential, no matter whether they might originate in the news media, the cinema, the internet, the ubiquitous realm of commercial advertising, or even the family photo album. Richter has also reinvigorated the idea that desiring "beauty" in one's work is a perfectly acceptable ambition, particularly at a time when many of his generation presumed that any desire for aesthetic pleasure was something to be embarrassed about, or indeed applicable only to a distant, presumably less sophisticated people in history.