Born: October 10, 1858
St. John's, Newfoundland, Canada
Died: February 1, 1924
New York City, New York
Impressionism
American Impressionism
Fauvism
Neo-Impressionism
Post-Impressionism
Main
Biography
Artworks
The best painting isn't done by boys. It's the work of mature men.
Maurice Prendergast
I was much influenced by Pissarro but with the watercolors it was nature pure and simple. Some effects I would see would really drive me frantic.
Maurice Prendergast
I am working. My mind is virtually set to compose, to which everything else is secondary, that is, which interferes with my work.
Maurice Prendergast
Italy is the place for ideas to dance a high step on the paint box.
Maurice Prendergast
If the circumstances of a man's life admitted the acquisitions of only one set of ideas his works would be thin....
Maurice Prendergast
The Signs of Genius is the power of recognizing and assimilating that which is necessary to the development of oneself.... We come into the world with nothing in our own right except the capacity for the acquisition of ideas. We cannot invent ideas, we can only gather some of those in circulation since the beginning of the world. We endow them with the color and form of our own time and if that color and form be of a supreme quality the work is preserved as a representation of a period in the history of civilization.... Genius is the power of assimilation. Only fools think the[y] invent.
Maurice Prendergast
•
•
•
•
•
•

Maurice Prendergast was born to an American mother and Canadian father at the family's sub-Arctic trading post in St John's, Newfoundland.

The oldest of five siblings, he suffered early familial loss including a still-born younger sister and later, when he was six, the death of her twin brother Richard. His own twin sister, Lucy, died when he was in his late teens. Perhaps it was these deaths that contributed to his lifelong attachment to his brother Charles, five years his junior.

While little is documented about Prendergast's younger years, it is known the family moved to Boston when he was ten. At 14 he went to work in a dry goods store as a package wrapper. When not at work, Prendergast studied mechanical drawing and attended free evening art classes. Later, he worked as an apprentice, lettering cards and by the age of 28 he had gained employment as a designer of cards and signs for a Boston firm.

Prendergast did not formally study art until an extended stay in Paris, beginning in January 1891, where he attended two prestigious schools, the Académies Julian and Colarossi. The watercolors he created during his stay, mostly scenes of Paris life, were well received and several of his sketches were selected to be reproduced in the magazine, The Studio, in 1893. Unfortunately, at the time the public did not know the works were by Prendergast as they had been stolen from his studio and submitted under the name of Michael Dignam. It was also during this stay, that he began a series of monotypes that were, in part, inspired by the works of Degas and Pissarro. After four years abroad, Prendergast returned home and quickly established himself as an artist by exhibiting his works in cities including Boston, Chicago, and New York. In addition, he took on commissions to create posters and book illustrations. His most notable being the 1895 James M. Barrie book, My Lady Nicotine: A Study in Smoke, for which he created the cover image and a further 138 illustrations.

Family was important to Prendergast, he never married and lived with his brother Charles throughout his life. Charles (who was also an artist) played an integral role in supporting his brother's career by starting a frame-making business which allowed Prendergast to come into contact with wealthy collectors as well as providing financial stability for them. The two, while reserved, were known for their charismatic personalities and looks. Of the brothers, one friend said, "They were odd and wonderful people, Mr. Maurice and Charlie. They always looked so clean and jaunty. There was something Peter Pan about both of them, [they] never quite grew up." Health issues hampered Prendergast's work throughout his life. By 1905 he had developed severe hearing problems and having tried medical treatments without success, he temporarily put his work aside to join a swimming club called the L Street Brownies in the hope that an intense course of outdoor swimming and exposure to the sun would help delay the loss. Ultimately this, nor any other cure, would prove successful.

In 1907 Prendergast returned to Europe where he drew inspiration from the work of artists such as Cézanne, Matisse, and Seurat stating "I am so chocked full of the exhibitions here I don't know what influence it will have after I am once more home." His work subsequently began to focus more on explorations of color conveyed in a Post Impressionistic and often Pointillist style.

Through his exhibitions in New York, Prendergast became affiliated with a group of painters known as 'The Eight'. This was a short-lived association of American artists who protested about the restrictive display policies of the National Academy of Design. Led by Robert Henri, other members included Arthur Davies, William Glackens, Ernest Lawson, George Luks, Everett Shinn, and John Sloan. Whilst all of the artists in the group sought to bring art into closer touch with daily life, Prendergast's work was unique in that it utilized color more freely and lacked the grittier, often darker, aspects of urban realities seen in the works of members such as Henri or Glackens.

The group only formally exhibited once (in 1908) but the exhibition helped to secure Prendergast's position as an interesting and innovative artist. This was acknowledged by a reviewer from the Newark Evening News who, after visiting the exhibition, wrote, "do not think that Prendergast has spoken the final word with his Cézanne technique. We will hear more of it when the influence of France upon the young artists studying there now becomes better known. Prendergast has sacrificed much in adopting it, but then, like his comrades, he has the satisfaction of being true to himself."

Many artists associated with 'The Eight' later became part of a larger movement known as the Ashcan School, which focused on Realism. Whilst, remaining friends with these artists, Prendergast's developing style prevented a formal affiliation with this new group and led him on a more solitary journey.

Prendergast's work was also included in the pivotal Armory Show of 1913 and while his paintings were considered modern for American audiences, he did not embrace the Cubist style that was the most controversial aspect of the show. Unsure of this new movement, which he could appreciate but would not adopt, he famously stated, "Too much - O my God! - art here." 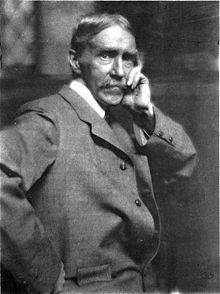 In 1914 Prendergast settled in New York with his brother where he found himself in high demand with collectors. The last decade of his career was important because it was during this period that he made his largest paintings. He also started to embrace new subjects including classical themes and symbolic imagery.

Despite declining health and the complete loss of hearing, Prendergast continued to paint for as long as he was physically able. He received a prestigious honor, shortly before his death, the Corcoran Bronze Medal, for a work in a December 1923 exhibition at the Corcoran Gallery of Art in Washington, D.C. Seriously ill and in hospital suffering from circulation issues, he was unable to accept the award in person, but humbly responded that "I'm glad they've found out I'm not crazy, anyway,".

In February 1924, shortly after undergoing surgery, Prendergast died peacefully in the hospital. Characteristic of the private way he lived his life he was cremated without fanfare the day after his death.

The Legacy of Maurice Prendergast

Maurice Prendergast played a key role in the development of Modernism in America. His ability to absorb and adapt the tenets of European Modernism into his own distinctly color-focused style introduced the American public and other artists to Post Impressionism. Whilst his own work retained strong European influences, he gave subsequent generations of American artists the opportunity to take and develop his ideas into a more specifically American style. In addition, he had a thematic influence on many artists who echoed Prendergast's use of images of leisure activities and recreational spaces.