Born: February 26, 1879
near Kiev, Ukraine
Died: May 15, 1935
Leningrad, Soviet Union
Suprematism
Constructivism
The Sublime in Art
Main
Biography
Artworks
To the Suprematist the visual phenomena of the objective world are, in themselves, meaningless; the significant thing is feeling, as such, quite apart from the environment in which it is called forth.

Academic naturalism, the naturalism of the Impressionists, Cézanneism, Cubism, etc., all these, in a way, are nothing more than dialectic methods which, as such, in no sense determine the true value of an art work.

Feeling is the determining factor ... and thus art arrives at non-objective representation through Suprematism.

No more 'likenesses of reality,' no idealistic images, nothing but a desert!

Suprematism is the rediscovery of pure art which, in the course of time, had become obscured by the accumulation of "things".

The black square on the white field was the first form in which nonobjective feeling came to be expressed. The square = feeling, the white field = the void beyond this feeling.

I have transformed myself in the zero of form and fished myself out of the rubbishy slough of Academic Art. I have destroyed the circle of the horizon and escaped from the circle of objects, the horizon-ring that has imprisoned the artist and the forms from nature. The square is not a subconscious form. It is the creation of intuitive reason. The face of the new art. The square is the living, royal infant. It is the first step of pure creation in art.

Instead of red, black (zero color); instead of a face, a hollow recess (zero lines); instead of an icon - that is, instead of a window into the heavens, into the light, into eternal life - gloom, a cellar, a trapdoor into the underworld, eternal darkness.
Writer Tatyana Tolstaya on the Black Square placed in corner of gallery
•
•
•
•
•
•
•
•

Malevich was born in Ukraine to parents of Polish origin, who moved continuously within the Russian Empire in search of work. His father took jobs in a sugar factory and in railway construction, where young Kazimir was also employed in his early teenage years. Without any particular encouragement from his family, Malevich started to draw around the age of 12. With his mind set firmly on an artistic career, Malevich attended a number of art schools in his youth, starting at the Kiev School of Art in 1895. 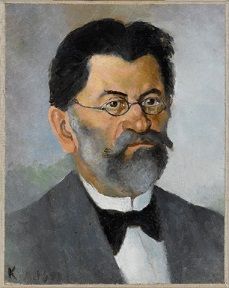 In 1904, Malevich moved to Moscow to attend the Stroganov School of Art. He also took private classes from Ivan Rerberg, an eminent art instructor. Malevich continued his training in the Moscow School of Painting, Sculpture, and Architecture, where such artists as Leonid Pasternak and Konstantin Korovin taught him Impressionist and Post-Impressionist techniques of painting. Malevich's early work was largely executed in a Post-Impressionist mode; however the influence of Symbolism and Art Nouveau on his early development was just as significant. A shift toward decidedly more avant-garde aesthetics occurred in Malevich's work around 1907, when he became acquainted with such artists as Wassily Kandinsky, David Burliuk, and Mikhail Larionov. In 1910, Larionov invited Malevich to join his exhibition collective named the Jack of Diamonds. Malevich also held memberships in the artistic groups Donkey's Tail and Target, which focused their attention on Primitivist, Cubist, and Futurist philosophies of art. After quarreling with Larionov, Malevich took on a leading role in the association of the Futurist artists known as the Youth Union (Soyuz Molodezhi) based in Saint Petersburg,

Most of the Malevich's works from this period concentrated on scenes of provincial peasant life. From 1912 to 1913, Malevich mostly worked in a Cubo-Futurist style, combining the essential elements of Synthetic Cubism and Italian Futurism, resulting in a dynamic geometric deconstruction of figures in space. In 1913, Malevich took part in one of the most significant artistic collaborations of modern times, creating set designs for the opera Victory over the Sun. In 1915, Malevich laid down the foundations of Suprematism when he published his manifesto, From Cubism to Suprematism, abandoning figurative elements in his painting altogether and turning to pure abstraction.

The October Revolution of 1917 opened a new chapter for Malevich. In 1918, he joined the People's Commissariat for Enlightenment as an employee of its Fine Arts Department, known as IZO. The new agency was to administer museums and to oversee art education in the new Soviet Republic. Malevich also taught at the Free Art Studios (SVOMAS) in Moscow, instructing his students to abandon the bourgeois aesthetics of representation and to venture instead into the world of radical abstraction. That same year, Malevich designed the decorations for a performance of Vladimir Mayakovsky's Misteriya-Buffa, which marked the first anniversary celebration of the Communist Revolution.

In 1919, Malevich completed the manuscript of his new book O Novykh Sistemakh v Iskusstve (On New Systems in Art) in which he attempted to apply the theoretical principles of Suprematism to the new state order, encouraging the deployment of avant-garde art in service to the state and its people. Later that year, however, Malevich left the capital for the town of Vitebsk, where he was invited to join the faculty of the local art school directed by Marc Chagall, and also El Lissitzky was on the faculty and ran the printing press. When Chagall left Vitebsk for Paris (or was effectively pushed out by the charismatic Malevich that developed a strong following), Malevich remained as the influential leader of the Vitebsk school. There he organized students into a group under the name of UNOVIS, an abbreviation, which could be translated as Affirmers of New Art. Quite particularly, the group was a collective where no individual signed a work with their own name, only with the name of the group. No longer focused on painting proper, the UNOVIS group, especially after its move to Petrograd in 1922, designed propagandistic posters, textile patterns, china, signposts and street decorations, reminiscent of the activities undertaken at the Bauhaus School in the German Weimar Republic.

Malevich continued to develop his Suprematist ideas in a series of architectural models of utopian towns called Architectona. These maquettes were composed of rectangular and cubic shapes arranged to enhance their formal qualities and aesthetic potential. Malevich was allowed to take these models to exhibitions in Poland and Germany, where they sparked critical interest from local artists and intellectuals. Malevich left several Architectona models, as well as theoretical texts, paintings, and drawings in Germany after his hasty departure for Russia. In Soviet Russia, however, a different cultural paradigm was set in motion. The artistic flourish of the 1920s was curtailed by the advent of state-sponsored Socialist Realist art, which eventually came to suppress all other artistic styles.

Malevich and his work were doomed to descend into obscurity in such belligerently conservative socio-cultural circumstances. In 1930, Malevich was arrested and questioned about his political ideologies upon his return from a trip to the West. As a precautionary measure, the artist's friends burned some of his writings. In 1932, a major state-endorsed exhibition commemorating the 15th anniversary of the Bolshevik Revolution was held in Moscow and Leningrad (formerly Petrograd, and Saint Petersburg before that). Malevich was included, only now his paintings were accompanied by pejorative slogans, labeled as essentially "degenerate" and anti-Soviet. Barred from state schools and exhibition venues, in his late years the artist returned to old motifs of peasant and genre scenes, while also executing a number of portraits of friends and family. He died of cancer in Leningrad in 1935 and was buried in a coffin of his own design, with the image of the Black Square placed appropriately on its lid. Having previously been consigned to the basements of Soviet museums, it was only under Gorbachev in 1988 that Malevich's works were brought out and shown to the public. Before glastnost, there were only a few of Malevich's works available for viewing in America -- the ones available were the results of the extraordinary measures taken by New York's Museum of Modern Art's Alfred Barr, who smuggled 17 of Malevich's paintings - some of which were rolled up in his umbrella - out of Nazi Germany in 1935.

The Legacy of Kazimir Malevich 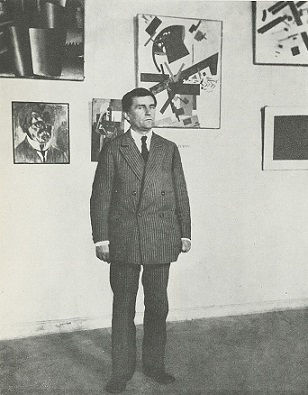 Malevich conceived of Suprematism prior to the 1917 Revolution, but its influence was already significant amongst the Russian avant-garde. Malevich's use of non-representational imagery and his interest in dynamic geometrical form in pictorial space influenced the art of Lyubov Popova, Alexander Rodchenko, and El Lissitzky. In 1922, the artist devised his three-dimensional Suprematist works, called arkhitektony, which were studies in architectural form. In Soviet Russia Socialist Realism become the only accepted style and in the country Malevich (and his abstraction ideas) was relegated to obscurity.

Fortunately, some of Malevich's ideas were exported to the West through the exhibition of these Suprematist models for Utopian towns in Poland and Germany, where the avant-garde discourse would incorporate Malevich's theoretical perspectives on abstraction. Malevich made only one trip to the West in 1927, accompanied by a number of Suprematist canvases, which were exhibited at the Stedelijk Museum in Amsterdam, where they were subsequently seen by many European artists. In Warsaw, Malevich met with artists who had studied with him in Vitebsk, and whose work was heavily influenced by Malevich's monochrome works.

More broadly, Malevich's influence is evident in the work of later artists in Europe and particularly the United States whose work consists of totally abstract shapes that represent technology, universality, or spirituality - all ideas stemming from Malevich. New York's Museum of Modern Art first director Alfred Barr purchased a large collection of his works. Via these routes, Malevich paved the way for many generations of later abstract artists - especially Ad Reinhardt and the Minimalists - to free themselves from reliance upon the real world.