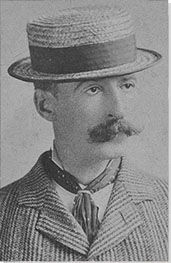 Born: February 24, 1836
Boston, Massachusetts
Died: September 29, 1910
Prout's Neck, Maine
American Realism
Naturalism
The Sublime in Art
Main
Biography
Artworks
A painter who begins and finishes indoors, that which is outdoors, misses a hundred little facts...a hundred little accidental effects of sunshine and shadow that can be reproduced only in the immediate presence of Nature. This making of studies and then taking them home is only half right. You get composition, but you lose freshness; you miss the subtle and, to the artist, the finer characteristics of the scene itself.

One can imagine Winslow Homer walking the Maine shoreline captivated by the sublime power of the natural world and seeking to translate that experience onto his canvases through the bravura of his gestural brushwork. In these paintings, nature's power is both sublime and eternal, and coolly indifferent to the drama of the human condition.

The raw style of these later years was not an anomaly, but rather the distinguishing characteristic of Homer's overall career. He regularly approached subjects overlooked by professional artists of his time - rural schoolchildren, hunting scenes, or the lives of recently emancipated African-Americans - with a passion to tell a story. The uncompromising Realism of his style charted a new course for American Art, distinct from the stage-like settings of his European counterparts, while also dispensing with the idealized of the landscape or slick portraits of the upper classes which had previously dominated American painting. Instead, Homer documented the lives of average Americans in a straightforward and seemingly spontaneous style.

This look toward the defining qualities of American life and landscape not only captivated Homer, but also the later generations of American artists whom he inspired. The naturalism that marks Homer's long career, would provide a solid foundation for other icons of American painting, including Robert Henri, George Bellows, and later the modernist Marsden Hartley, each of whom made their own pilgrimage to the rocky shorelines of Maine. It was here that Homer and those who followed explored themes of mortality through images of the turbulent and seemingly eternal stretch of the northern Atlantic.

Winslow Homer was born to Charles Savage Homer and Henrietta Benson Homer in Boston, Massachusetts, the middle child of three sons. The family moved when young Winslow was six years of age to the nearby rural town of Cambridge. His mother was an amateur watercolorist who taught her artistic son the rudiments of her craft; their shared affinity for the arts fostered a close relationship that lasted throughout their lives. His father, on the other hand, was a largely-failed businessman and, in the words of art historian and curator Nicolai Cikovsky, an eccentric in "behavior and appearance." He was, nevertheless, supportive of his son's artistic ambitions. As Cikovsky details in the exhibition catalogue for the comprehensive 1995 exhibition at the National Gallery of Art in Washington, D.C., "He also encouraged his son's 'leaning towards art' by acquiring for him, on a business trip to England, such resources for artistic self-help as 'a complete set of lithographs by Julian [sic] - representations of heads, ears, noses, eyes, faces, trees, houses, everything that a young draughtsman might fancy trying to make his hand at." Additionally, it was his father who arranged the hopeful artist with an apprenticeship to an acquaintance John H. Bufford, a prominent commercial lithographer in Boston, when Winslow reached 19 years of age. 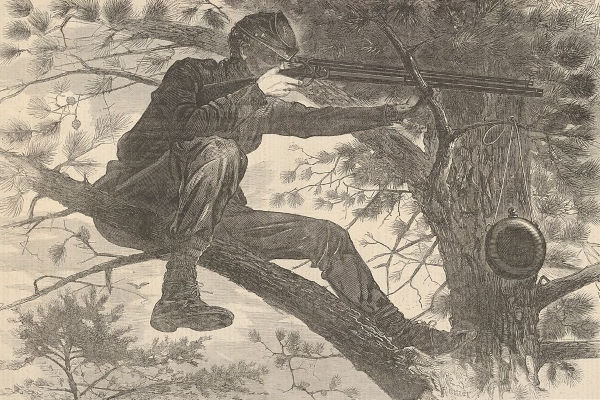 After years of working as a freelance illustrator for Harper's Weekly, Winslow Homer was contracted by the publication to serve as a war correspondent. In sharp contrast to the light-hearted tone of Homer's early illustrations, his thoughtful portrayals of the US Civil War captured both the daily lives and moments of conflict which he experienced first-hand while visiting the Union soldiers on the front lines. Less obvious to modern viewers, are the changes in the technology and warfare shown in this engraving which was later the basis of an oil painting by the artist.

In The Sharpshooter, a young soldier sits perched on a sturdy tree branch, one imagines quite high from the ground below. The barrel of his rifle steadied against a smaller branch, while his position seems a bit precarious without any true grounding for his feet. Thick pine needles provide camouflage, while a hanging canteen suggests that the soldier has been in this position for quite some time and will probably remain there. What Homer has depicted was a new and devasting style of battle, the sharpshooter, made possible by advances in the design of the rifle. "I looked through one of their rifles once when they were in a peach orchard in front of Yorktown in April, 1862," Homer recalled. "The ... impression struck me as being as near murder as anything I ever think of in connection with the army & I always had a horror of that branch of the service." Instead of romanticizing heated scenes of battle, Homer depicted the impact of changing technologies in a straightforward, documentary manner devoid of the overt emotionality and heroic undertones so prominent in earlier depictions of war. As such, the notion of objectivity, so often associated with the Realist movement in America and Europe, finds true resonance with Homer's compositions. 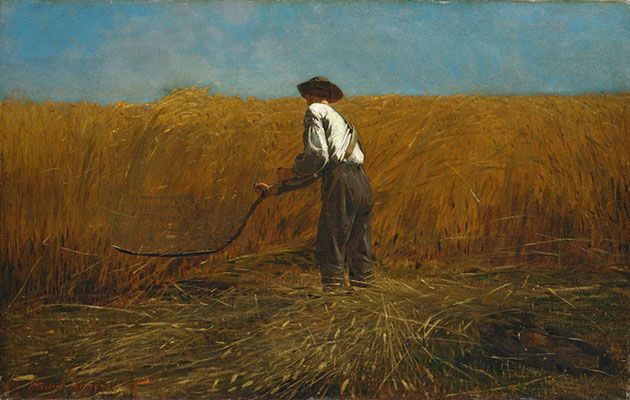 Among the best-known of Homer's Civil War paintings, The Veteran in a New Field demonstrates the artist's profound understanding of the socio-historical moment in which he lived. A lone farmer harvests the seemingly eternal field of wheat with a single-bladed scythe. In the lower right corner, a Union soldier's jacket and canteen signal that this farmer is also a veteran of the recent Civil War. Painted shortly after the end of the devastating war and President Abraham Lincoln's subsequent assassination, The Veteran in a New Field is an early example of Homer's ability to weave subtle narratives into his paintings. The single-bladed scythe was, by this time, an antique tool and meant to evoke notions of "the grim reaper" and allusions to the casualties of war, with some of the major battles including Gettysburg, had been waged in what had formerly been working farms. Additionally, the peaceful disbanding of troops after the war was seen as an embodiment of a democratic ideal, with references to the Roman legend of Cincinnatus who similarly returned to his farm after leading Rome to victory over her enemies, a common point of reference in Homer's time. The combination of these elements has led historians such as H. Barbara Weinberg to consider the work, "a powerful meditation on America's sacrifices and its potential for recovery."

In terms of artistic strategy, Homer's painting seemingly blends Realist and Impressionist techniques in what would be described as a uniquely American style. The working figure of the soldier, painted in a relatively naturalistic style, suggests the hard labor of the solitary figure under the bright sun as he swings his tool across the wheat. By comparison, the wheat reads as Impressionistic, even though this painting dates before the beginnings of the Parisian style or Homer's trip to France. As Nicolas Cikovsky writes, "It had been Homer's practice to paint out of doors well before he went to France, so it cannot have been Impressionism ‑ even in the improbable event that he knew of it - that introduced Homer to the practice of open-air painting. It had been a central part of his artistic method virtually from his beginnings as a painter." The blending of naturalistic and impressionist styles in this and other works from the late 1860s are thought by many to have yielded a strong influence on American Impressionism, which, while focusing on different subjects, adopted some of the same loose brushstrokes. 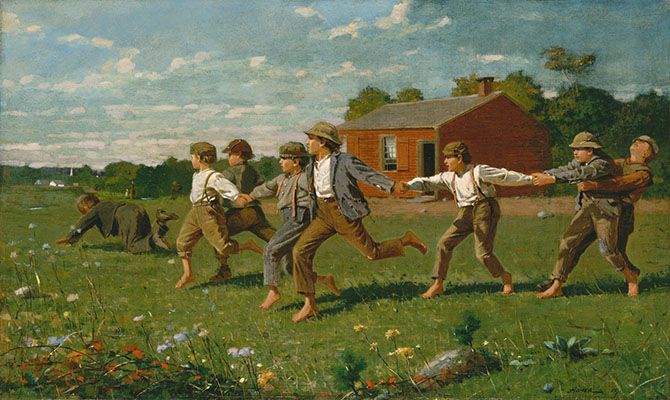 One of Homer's most famous paintings presents modern viewers with a bit of a conundrum. It appears as a simple and idyllic scene with a line of young boys holding hands and running at top speed across a field of grass, rendered in an impossibly bright Kelly green speckled with wildflowers of various hues. In the background, a small red school house rests below a patchwork sky of blue and white. The painting, titled "Snap the Whip!" (1872) seems wistful, even nostalgic, and perhaps not what one expects in discussing one of the most esteemed American painters of the 19th century. Yet, even Homer's most idyllic paintings transcend nostalgia as one looks closer to find signs of poverty, such as the children's tattered and ill-fitting clothing and bare feet. Art historian Edward Lucie-Smith described in his text, American Realism, "Childhood and the life of children took on a special significance in America in the years following the Civil War, and these images symbolized the will to rebuild and to make a stronger and more vigorous nation." Subtle allusions to the lost generation of Civil War soldiers, the young widows left behind along with the hopes for the next generation provide the underlying narrative of these post-war works which focus on the lives of young teachers and their students.

The books and articles below constitute a bibliography of the sources used in the writing of this page. These also suggest some accessible resources for further research, especially ones that can be found and purchased via the internet.
biography / catalogues
illustrated by artist