Born: October 1760
Edo (Now Tokyo)
Died: May 10, 1849
Edo
Ukiyo-e Japanese Woodblock Prints
Main
Biography
Artworks
From the age of six, I had a penchent for copying the form of things, and from about 50 large numbers of pictures were published; but until I reached the age of 70, nothing I drew was worthy of notice.
Katsushika Hokusai
When one is old, one's skill quickly declines. Fortunately however, I am not boynd by these long-established ways of thinking...Now I am close to 80, but the strength of my brush is unchanged - it is like that of a young man's.
Katsushika Hokusai
When I am 100 years old, I will have attained a mysterious level, and at 110 every dot and stroke will be alive.
Katsushika Hokusai
If only heaven would give me another ten years...If heaven would give me just five more years, I might become a true painter.
Katsushika Hokusai
•
•
•
•

Katsushika Hokusai was born in 1760 under the name of Kawamura Tokitaro and brought up by Isa Nakajima, a mirror maker for the Shogun. There is little known of Hokusai's early life, with suggestions that his mother was a concubine and that he was adopted by Nakajima at birth. Hokusai's childhood was spent in an artisan's community of wooden houses and narrow streets in Edo (now Tokyo). He began painting at age six and learnt woodblock carving, too, from a young age.

As a teenager, Hokusai loaned books for money before beginning work as a woodblock cutter in 1774. He apprenticed himself to older artists, most prominently including Katsukawa Shusho, who was head of the Katsukawa school and specialized in prints of courtesans and Kabuki theater actors. At nineteen, Hokusai took on the name Shunro, the first of around thirty names that he would use during his lifetime. This practice, in which an artist adopted a new name each time they reached a new level of proficiency, was common at the time, but Hokusai took on many more names than was typical, which later assisted scholars in dating many of his works.

At Katsukawa's studio, Hokusai was tasked with producing prints from kabuki and images of sumo wrestlers. He was not among the most favored of the apprentices, however, and so was given off-season performances to depict and cheap paper and low-standard pigments with which to work. While working here, Hokusai published his first series of prints, of kabuki actors, in 1779, and married his first wife, about whom little is known.

In 1784, Hokusai changed his name again, to Gunbatei, and is believed to have left the Katsukawa studio. He began to design illustrations for books. It appears that this was a time of intense change in Hokusai's life; he began to move away from prints depicting people and toward landscapes and images of daily life, which was a breakthrough for both Hokusai's career and Ukiyo-e more broadly. Hokusai's personal life, too, was tumultuous, with his wife bearing three children prior to her death, of causes now unknown, in the early 1790s.

In the 1790s, Hokusai parted ways with the Katsukawa school more definitively, having been expelled by Katsukawa's chief disciple following their master's death in 1793. He began to explore European traditions, acquiring French and Dutch copper engravings and experimenting with linear perspective. His work caught the eye of Utagawa Toyoharu, who invited Hokusai to join his atelier. Hokusai married again in 1797 and had two more children, including Oi, born in 1800, who would go on to work with him and become an artist herself.

It was in 1801 that Hokusai began to use the name under which he is now known, signing images with the phrase Gakyojin Hokusai ga, which has been translated as "painted by the madman of painting, Hokusai." Hokusai became known for his eccentricity in everyday life as well. He was reported to have moved residences ninety-three times due to a hatred of cleaning, preferring to find new lodgings when his home became unbearable. His messiness was not restricted to interior spaces; each morning he drew a Chinese dragon and threw it out a window for good luck. Hokusai was also known, though, for his liveliness. In the early nineteenth century, he appears to have been quite a performative artist. In 1804, at a festival in Edo, he produced a portrait of a Buddhist monk, 180 meters long, with the help of students, using a broom in place of a paintbrush. In 1807, he took part in a painting contest, producing a landscape with birds and flowers before taking a chicken from a nearby basket, dipping its feet in red paint and allowing it to run over his painting, announcing to the audience that the footprints were "maple leaves on the Tatsu River." In this decade, Hokusai began to produce his most ambitious work and became phenomenally successful. He published two more drawing manuals, entitled Transmitting the Essence and Enlightening the Hand: Random Drawings by Hokusai, also known as Hokusai Manga. These books would continue across his life and posthumously, eventually amounting to fifteen volumes that have had an ongoing impact on manga and anime. The works have been reprinted several times and are, according to a widely circulated anecdote, responsible for the European trend of Japonism, with several sheets arriving alongside porcelain (by some accounts) at painter and etcher Auguste Delatre's workshop. 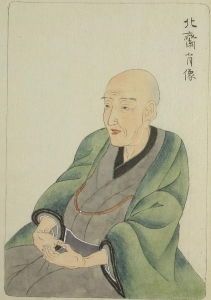 Hokusai firmly believed that he would improve as an artist as he grew older and posthumous critics have agreed that this was the case. In 1830, he published Thirty-Six Views of Mount Fuji, pushing Ukiyo-e in the direction of landscape, and in 1831 published One Hundred Ghost Stories. He changed his name, at this point, to Iitsu, meaning "one year old," emphasizing this period as a time of metaphorical rebirth. He continued to experiment and adapt to new styles and was very successful professionally.

Hokusai's personal life, however, continued to be tumultuous. One of his daughters had died in 1821 and his second wife died in 1828, after which his youngest daughter, Oi, left her husband to return to Hokusai's home. In 1839, a fire in Hokusai's studio destroyed much of his work. At around this point, his grandson began to gamble and behave badly, exhausting the family's finances. Hokusai and his daughter were forced to leave their home and live in a temple.

Hokusai died at the age of ninety in 1849, having created around 30,000 print designs across his lifetime. His final words, reportedly, were a wish for more time: "if heaven would give me just five more years, I might become a true painter." His burial, at the Seikjoji Temple in Taito, attracted around a hundred people. His tombstone was inscribed with his final adopted name, Gakyorojin Manji, which translates to "old man mad about painting."

The Legacy of Katsushika Hokusai Hokusai had a broad impact in his own lifetime and subsequently, with his influence spanning to the present day. Within Japan, his contributions moved Ukiyo-e from focusing on scenes of city life to landscapes and led to greater experimentation and change in approaches to perspective; Hokusai's approach was continued by Utagawa Hiroshige, who produced a direct homage to Hokusai's Fujimigahara in Owari Province, entitled Barrel-maker, Copied from a Picture by Old Master Katsushika, in 1836 and Kobayashi Kiyochika, who represented late nineteenth century industrialization through use of similar techniques. Hiroshige was influenced by Hokusai's practice of depicting the landscape in series, but differentiated himself through prints that were more loosely composed, with an emphasis on depicting nature as it appeared.

The relaxation of Japanese import and export rules in the 1850s meant that Hokusai's influence was able to spread internationally soon after his death. In 1896, he was established enough in France that Edmond de Goncourt published a book on Hokusai that cemented his reputation and Henri Rivère adapted Hokusai's approach to a European setting in his Thirty-Six Views of the Eiffel Tower series in 1902. Hokusai's Great Wave off Kanagawa (1829-1832) directly inspired Gustave Courbet's series of sixty paintings on waves. The Hokusai manga was used as a drawing manual by Berthe Morisot, Paul Gauguin and Vincent van Gogh while both Claude Monet and Gustav Klimt owned Hokusai's prints, influencing the development of both Impressionism and Art Nouveau.

The iconic nature of Hokusai's prints has contributed to his ongoing influence on both fine art and popular culture. Great Wave off Kanagawa is among the most reproduced images in the history of art, referenced by cartoonists including Hergé and Gary Larson, fashion designer Hanae Mori and transformed into an emoji in 2010. The Dream of the Fisherman's Wife has been similarly influential in recent years, with artists including David Laity and Masami Teraoka creating works referencing the print as a means of exploring female sexual power; Syundei's Go For It, Nakamura! draws from Hokusai's use of the octopus to explore queer sexuality.

Hokusai's explorations of perspective have been expanded by recent artists, prominently including Jeff Wall and Takashi Murakami, who have borrowed from Hokusai to develop different approach-es to flatness.