Born: July 26, 1893
Berlin, Germany
Died: July 6, 1959
Berlin, Germany
Dada
New Objectivity
Photomontage
Main
Biography
Artworks
I was arrogant enough to call myself a natural scientist, not a painter, nor, heaven forbid, a satirist. But in reality I myself was everybody I drew, the rich man favored by fate, stuffing himself and guzzling champagne, as much as the one who stood outside in the pouring rain holding out his hand. I was, as it were, divided into two.

...I considered any art pointless if it did not put itself at the disposal of political struggle....my art was to be a gun and a sword.

It's an old ploy of the bourgeoisie. They keep standing 'art' to defend their collapsing culture.

What I had discerned from the pre-war period could be summed up as follows: human beings are swine. All the prattle about ethics is a swindle, intended for the stupid. There is no point to life than to satisfy one's hunger for food and women. The soul does not exist.

What did the Dadaists do? They said this: huff and puff as much as you like - the shooting goes on, the usury goes on, the starving goes on. What earthly good is art? Was it not totally ridiculous when art took itself seriously and no one else did? Hands off holy art, screamed the opponents of Dadaism. Why did the same gentlemen forget to scream when their artistic monuments were shot at and their colleagues raped and murdered?

I had grown up in a humanist atmosphere, and war to me was never anything but horror, mutilation and senseless destruction, and I knew that many great and wise people felt the same way about it.

The bourgeoisie and the petty bourgeoisie have armed themselves agains the rising proletariat with, among other things, 'culture.'

Georg Ehrenfried Groß was the youngest child born to Karl and Marie Wilhelmine Groß. He lived with his two older sisters in a Berlin public house, owned and managed by his parents, until the business failed in 1899. The family moved to Stolp, a rural town on the northeastern coast (now part of Poland), where Karl, a Freemason, had secured a position as the local lodge caretaker. His death in the following year compelled the Groß family to return to Berlin, where Georg's mother and sisters made a living by sewing.

Georg moved back to Stolp in 1902, when his mother obtained a job with the Hussars regiment. He enjoyed illustrations of war, having drawn pictures of horses and soldiers with his father at an early age, and gained further exposure through representations of historic battles and uniform sketches displayed in the officer's clubhouse. Georg's earliest known sketchbooks date to 1905, in which soldiers feature prominently, as well as the robbers, cowboys, and Indians gleaned from his favorite adventure stories. As he grew older, he continued to extract ideas from popular novels and magazines. Many of these stories took place in the Wild West, building an idealistic view of American culture in Georg's mind that persisted into adulthood.

In 1908, Grosz was expelled from school for striking back after receiving punishment from a teacher. His drawing master, however, recognized his talents and helped him apply to the Dresden Academy of Art. At the academy, Grosz learned to be a skilled copyist by drawing plaster busts. His personal style developed outside of the classroom, strongly influenced by Jugendstil (Art Nouveau), magazines, and cartoon illustrations. He greatly admired illustrations in Ulk, the humorous supplement of the Berliner Tageblatt that also featured Grosz's first published drawing in 1910.

After graduating from the academy in 1911, Grosz moved back to Berlin. Looking to develop his work, he began to execute studies from life for the first time. He immersed himself in the pleasures of the city, drawing inspiration from café culture and nightlife. A growing interest in the macabre and the surreal also revealed itself in his drawings of circus performers and prostitutes. While attending the Kunstgewerbeschule (School of Arts and Crafts) in Berlin, Grosz documented the struggles of the working class in his sketches. Shielded by academic insularity from the influence of avant-garde groups such as Die Brucke and Der Blaue Reiter, these drawings were merely observations of reality rather than political commentaries. In 1913, Grosz spent several months in Paris at the Académie Colarossi. Although claiming to be unimpressed by the city, he became friendly with Jules Pascin, whose spontaneous artistic style and erotic nudes informed Grosz's later work.

Seeing the war stories of his childhood come to life in the beginnings of World War I, Grosz joined the army in 1914, but was discharged after six months due to sinusitis. Cynical drawings, such as The Faith Healers (1916), documented his own experiences as a soldier and clearly demonstrated the dissolution of his idealistic beliefs regarding war. In order to both distance himself from his German roots, and to proclaim his affinity for American culture, Georg Groß had his name legally changed to George Grosz in 1916. He was recalled to active duty in 1917, but was permanently released after an obligatory stay in a psychiatric facility. Disillusioned by a human predisposition for violence he observed during World War I, Grosz's drawings became even more explicit, expressing his shock and disgust. He was inspired by earlier political and social satirists like Honore Daumier and William Hogarth, and aspired to become the 20th-century German equivalent of these renowned artists. Along with his colleagues Wieland Herzfelde and John Heartfield, he joined the Communist Party of Germany and developed a political satire magazine called Die Pleite (Bankruptcy).

Grosz made his first painting sales in 1919, followed by a contract with Hans Goltz, a Munich dealer who represented him exclusively until 1922. His anti-war sentiments led to involvement in political discussion, in which he supported the Leftists. Also in 1919, Grosz joined the Dada movement in Berlin, as his critical view of German society aligned with their ideals. He participated in the first Dada publications, exhibitions, and actions. Grosz and Heartfield developed the medium of photomontage, creating images such as Life and Work in Universal City, 12:05 Noon (1920) that served as leftist propaganda. From his activities, Grosz became a revolutionary figure and had a warrant issued for his arrest by the conservatives during the 1919 Spartakus Revolution. He went into hiding for a time, but continued to draw satirical cartoons for Die Pleite (Bankruptcy) and other satirical magazines like Der Gegner (the Opponent). 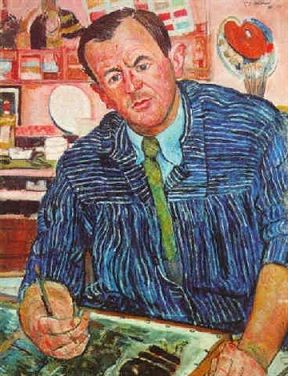 Grosz's first one-man show took place at Goltz's Galerie Neue Kunst in 1920. In the same year, he married his longtime girlfriend, Eva Peter; the event was commemorated by the drawing Daum Marries Her Pedantic Automaton "George" in May, 1920. John Heartfield Is Very Glad of It (1920). Peter later collaborated with Grosz on erotic, macabre fantasies that often revisited the subject of Lustmord (sexual murder). Daum(1920) was exhibited at the First International Dada Fair (1920), along with a portfolio of satirical drawings entitled Gott mit uns (God with us)(1920). The organizers, including Grosz, were put on trial and fined for "grossly insulting the German army." Unfazed, Grosz continued to publish propagandistic materials against the establishment, including Ecce Homo(1915-22), another portfolio for which he was accused of pornography and fined. During the 1920s he was recognized internationally as one of Germany's most important artists who participated in social and political criticism. His renown brought change to his art as well as his life, as he received several portrait commissions, which he completed without any hint of scorn or derision for the sitters. Due to the increasing political instability in Berlin and his antagonistic relationship with the government, Grosz spent several months in Russia and the French Riviera in the mid to late 1920s, before accepting an invitation to teach at the Art Students League of New York in 1932.

Returning to Germany for a short time in October 1932, Grosz observed the growing presence of the Nazi party. Shortly before Adolf Hitler came to power in 1933, he permanently moved his family to the United States. In addition to teaching, Grosz contributed illustrations to magazines such as the New Yorker, Vanity Fair, and Esquire. In 1933, he opened a private art school with fellow artist Maurice Sterne, but closed the school in 1937 after receiving a two-year grant from the Guggenheim Museum. Having abandoned satirical drawing, Grosz concentrated on painting oil landscapes. Meanwhile, the Nazis' Degenerate Art exhibition of 1937 in Berlin featured over 200 of his drawings, many of which were confiscated and later destroyed.

Grosz gained American citizenship in 1938, and his fame quickly spread after a 1941 retrospective at The Museum of Modern Art in New York. Despite his status as a hero of the people in Germany and his critical acclaim in America, Grosz made few sales and was forced to resume teaching at the Arts Students League. Throughout the 1940s and 1950s, Grosz accepted teaching opportunities at Columbia University, the Skowhegan School of Art, and the Des Moines Art Center, even reopening an art school in his home. Episodes of depression and heavy drinking, which had started shortly after his move to New York, became worse. Feeling as though his efforts resulted in little or no real change, Grosz declared that he was finished with social and political issues, and his style softened to a more sentimental romanticism. However, some of his works from the early 1940s, particularly during World War II, do present an allegorical and dramatic representation of Grosz's moral perspective regarding war. Additionally, some of his last pieces from 1958 were photomontages and hearken back to his earlier Dadaist aesthetic and message, passing judgment upon consumerism and suggesting that his absorption with American culture had ended in disappointment. In 1959, Grosz sold his house and moved back to Berlin. He died shortly after his return, after a fall down the stairs.

The Legacy of George Grosz

His role in the Berlin Dada movement affected political outlooks and artistic developments not only in Germany, but also in Russia, the Balkan nations, and parts of France. Grosz's penetrating, darkly humorous style of drawing and his use of satire as a weapon left a deep impression on the work of his contemporaries and the artists of the next generation. His photomontage work set a standard for social critique in the new medium and inspired the later collages of Romare Bearden. The critical content of his paintings influenced painter Francis Bacon, while his elaborately detailed and unflinchingly honest portraits influenced Lucien Freud's portrait work. Grosz's political orientation and social critique, embodied in his writings, prints, and drawings also had a clear impact on the writings of American novelist John Dos Passos.