Color is the skin of the world.

Up to the present, painting has been nothing but photography in color, but the color was always used as a means of describing something. Abstract art is a beginning towards freeing the old pictorial formula. But the real new painting will begin when people understand that color has a life of its own, that the infinite combinations of color have a poetry and a language much more expressive than the old methods. It is a mysterious language in tune with the vibrations, the life itself, of color. In this area, there are new and infinite possibilities.

If one does it well and it is not expensive, one could work all the time at couture.

I have had three lives: one for Robert, one for my son and grandsons, a shorter one for myself. I have no regrets for not having been more concerned with myself. I really didn't have the time.

Abstract art is only important if it is the endless rhythm where the very ancient and the distant future meet.

Just as, in written poetry, it is not the way the words are put together that counts, but the mystery of creation that gives, or does not give, an emotion...so with colors, it is poetry and the mystery of an inner life that emerges, radiates and communicates. On that basis, we can freely create a new language.

Sonia Delaunay was born Sara Élievna Stern, the youngest of three children, to impoverished Jewish parents in Odessa, Ukraine. At five, she was sent to live with her mother's well-off brother, Henri Terk, and his wife in St. Petersburg, Russia. Although her mother never allowed a legal adoption, Delaunay thought of them as her family and took the name Sofia Terk, using "Sonia" as a nickname. She received a good education, had access to great art collections, and traveled Europe spending summers in Finland. At sixteen, Delaunay's art teacher noticed her talent and encouraged her uncle and aunt to send her to Germany for further art training.

Eighteen-year-old Sonia began her studies at the Academy of Fine Arts in Karlsruhe in 1904. After two years in Germany, Delaunay moved to Paris to study at the Academie de la Palette. On December 5, 1908 she married her friend Wilhelm Uhde, an art dealer, ensuring that her family wouldn't be able to force her to come home while also covering for Uhde's homosexual lifestyle. Uhde gave Delaunay her first one-person show in 1908 featuring numerous portrait studies that demonstrated the early influence of Fauvists like Henri Matisse and introduced her to important art and literary figures, including, in 1909, her future husband, Robert Delaunay.

Sonia married Robert on November 15, 1910 after amicably divorcing Uhde, and their son Charles was born in January 1911. The two were to become one of the art world's most important partnerships, co-founding Orphism, a variation of Cubist art composed of abstract forms of vibrant color.

Although Delaunay's early work was in the field of painting, the creation of a patchwork quilt for her son instigated an entirely different direction to her work. She assembled the quilt according to a style she'd seen years earlier in Russia, laying scraps of fabric one beside the other. She was fascinated by the effects of the colors created from these strips once removed from their original context. This interesting discovery, coupled with Robert's interest in chemist Eugène Chevreul's theories on color, led the two to create works based on simultaneous color relationships known as Simultanism and soon enough Delaunay began to apply simultaneously contrasted colors not only to paintings, such as Bal Bullier (1912-13), but also to objects, such as cushions, boxes, and clothing.

Delaunay's refusal to distinguish between the worlds of fine art and crafts, and her friendships with the creative people who gathered at her home on Sundays, resulted in rich a career that included exciting collaborations. Her friendship with poet Blaise Cendrars, for example, led to the creation of a series of "poem-paintings," including La Prose du Transsibérienn et de la petite Jehanne de France (1913). 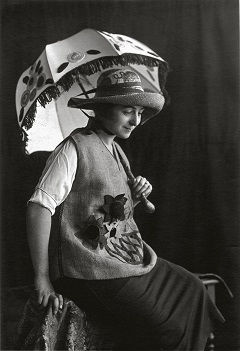 Delaunay traveled extensively throughout her life, each location influencing her work. While in Madrid in 1917, she began to design costumes for a production of Cléopâtre. This was just the first of what would become a number of ballet and theatrical performances for which she would provide designs. The following year she opened a design and fashion shop known as Casa Sonia. Never favoring one artistic pursuit over another, she described these diverse endeavors as, "noble work, as much as a still-life or a self-portrait."

Between the years 1918 and 1935, Delaunay painted very little, devoting herself to parenting and trying to make a living in order to support Robert's artistic career. She opened a fashion shop featuring her designs in Paris in 1921 which quickly attracted glamorous customers such as Hollywood actress Gloria Swanson. Delaunay's fabric designs became so popular that she eventually started her own company with Jacques Herm in 1924 and began a relationship with the Holland-based department store Metz & Co. the following year that would last more than three decades. A growing interest in the Dada art movement led to a fashion collaboration with poet Tristan Tzara, creating "dress-poems" with designs featuring color combinations inspired by his words.

Delaunay returned to painting in 1937 when she and Robert were asked to decorate two buildings for the Paris Exposition Internationale des Arts et Techniques dans la Vie Moderne. The murals she created for this commission were well received. After Robert's death in 1941 things became very difficult and Delaunay survived by selling both her own designs and Robert's paintings. Being of Jewish heritage she was forced to move frequently during the war, worried that she would be arrested. There was an occasion, in Cannes, when she was questioned regarding her middle name, "Stern." Apparently she stood her ground and, refusing to show fear, succeeded in boarding her train and escaping capture. Delaunay was acutely aware of the war, frequently hearing gunfire and watching German troop activity from as close as just outside her hotel windows.

At the end of the war, in 1944, Delaunay returned to Paris, intent on assuring that Robert's artistic legacy received proper recognition. When she was confident that this goal had been met she finally began to focus on her own art, concentrating primarily on painting with a series of gouaches in the 1950s called Rhythme coloré. The series explored the power of color, and the inherent rhythm in their combination on the canvas.

In 1964 Delaunay met author and poet Jacques Damase who would eventually become her partner, nurturing her late career by arranging numerous gallery exhibitions as well as the 1967 retrospective of almost 200 works at France's Musée Nationale d'Art Moderne.

Near the end of her life, Delaunay's work achieved both acknowledgement in her own country as well as global attention. As a measure of goodwill, French President Pompidou even gifted U.S. President Richard Nixon her painting Rhythme-couleur No. 1633 (1969).

In 1978, a year before she passed away, she helped design costumes for a performance of the play Six Characters in Search of an Author and finally published her autobiography. Having made an impact on both the art and fashion worlds, it was fitting that she chose to be buried in a dress that Hubert de Givenchy had designed for her to wear while attending a reception for England's Queen Elizabeth.

The Legacy of Sonia Delaunay

Orphism inspired artists such as Paul Klee to explore the effect of non-objective colored shapes. Later, proponents of the Op art movement, such as Bridget Riley, used color and shape to create optically-charged movement and vibration in their works that have connections to Deluanay's explorations. Kinetic movement artists, such as Yaacov Agam and Alexander Calder, continued this investigation in the third dimension in their sculptural constructions as well. Delaunay's textile designs extended the range of her influence into fashion, home decor and the theater. Her ability to introduce art into regular life by creating and wearing clothing, and living in spaces that were of her own design, can be seen as an early form of performance art, inspiring contemporary artists such as Marina Abramovic.