Born: April 26, 1798
Charenton Saint Maurice, Paris, France
Died: August 24, 1863
Paris, France
Romanticism
Orientalism
Primitivism in Art
Main
Biography
Artworks
The primary merit of a painting is to be a feast for the eye.

If you're not able to sketch a man who throws himself out of the window in the time it takes him to fall from the fourth floor to the ground, you'll never be able to produce great paintings.

Give me the mud from the streets and I shall make of it the delicious tones of a woman's flesh.

If by romanticism one means the free manifestation of my personal impulses, distancing myself from the rules set in schools, and my distaste for the recipes of the academy, I must confess that not only am I a romantic, I was from the age of 15.

Painting is fortunate in demanding no more than a glance in order to attract and to fix.

Adding the finishing touches is very difficult. The danger arises when one reaches a point where reworking is no longer useful, and I am a man prone to reworking.

Venice, Parma, Verona have seen color only from the material side. Delacroix touches at moral color; this is his oeuvre and his claim to posterity.

We all paint in Delacroix's language.

What I find so fine about Delacroix is precisely that he reveals the liveliness of things, and the expression and the movement, that he is utterly beyond the paint.

Some controversy surrounds the birth of Eugène Delacroix because of the timing of his father's operation to remove a testicular tumor just seven months before his birth. Most believe, however, that he was the youngest of four children born to parents Victorie Oeben and Charles Delacroix, a foreign minister under Napoleon's regime. Delacroix's early life was filled with much loss including the death of his father when he was seven; his brother was killed in battle when he was nine; and his mother passed away in 1814 when he was just sixteen.

Delacroix displayed an interest in art from an early age. With the encouragement of his uncle, artist Henri-François Riesener, he began to study at the studio of painter Pierre-Narcisse Guérin and at eighteen enrolled in the prestigious Ecole des Beaux-Arts in Paris.

Delacroix received his first commission in 1819 for the church of Orcement in France, for which he created The Virgin of the Harvest. A year later he was invited by Théodore Géricault to assist with a commission for the Cathedral of Nantes; Delacroix painted the final work, Virgin of the Sacred Heart (1822), and split the fee with Géricault. Delacroix had befriended the older artist when both men were students of Guérin. Delacroix had been greatly moved when he saw Géricault's Raft of the Medusa (1818-1819), and Géricault in turn recognized the talent of his young friend.

It was also early in his career that Delacroix developed his first bout of tubercular laryngitis that would plague him throughout his life, causing him constant worry about his health. In an attempt to prevent the illness from recurring he wore a scarf tied around his neck which, while functional, also helped to establish his reputation as a fashionable man. 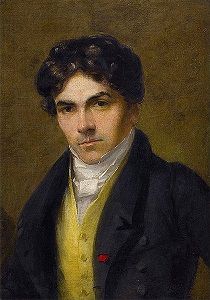 Known for his independence, Delacroix defied French artistic tradition by not applying for the prestigious Prix de Rome (the usual way for artists to gain career recognition) and instead established himself through regular exhibitions at public Salons beginning in 1822. He also strayed from classical themes and adopted a more modern approach by depicting dramatic narratives (often drawn from current events) with heightened color and dynamic compositions. This can be seen in such epic works as Scenes from the Massacres of Chios (1824); The Death of Sardanapalus (1828); and Liberty Leading the People (1830). These paintings helped establish Delacroix as a leader of the Romantic movement, a label he did not always relish. He was known to associate with the literary Romantics, including novelist Victor Hugo. His initial respect for Hugo later soured when he became known as "the Hugo of the palette."

A turning point in Delacroix's career was his 1832 trip to Morocco with Count Charles de Mornay, who was Louis-Philippe's special ambassador to the colony (France conquered Algeria in 1830, and the North African country became a French colony). Delacroix spent six months traveling around the country with the diplomatic delegation, and he was charged with documenting the journey in art works. One of the highlights of the trip was a visit to the Sultan, who gifted Delacroix a horse (that he later sold to fund the purchase of Moroccan objects he brought home with him). The sights, sounds, and strange new culture Delacroix encountered - most especially the people, their costumes, and the light and atmosphere of the Mediterranean land - would result in the creation of an entire body of work inspired by this journey. Finding models however was not always an easy task since many of the Muslims he met would not pose for the artist due to their religion's prohibition on the depiction of human images and as a result many of his subjects were Jewish people who were better able to welcome Delacroix into their homes to be sketched. Delacroix wrote of the trip, "The aspect of this country will remain forever in my eyes, all my life long the men of this noble race will live and move in my memory; it is they who have really brought back to me the beauty of the ancients."

Delacroix was avid writer who kept journals throughout his life. In fact, his main dairy was collected and later published as a 3 volume series titled Journal. Although of great importance and insight into the artist, the document is not a typical dairy, but contains various information from train schedules to addresses, memory aides, working methods, and ideas about art.

Upon returning to France, Delacroix's career was marked by important official commissions, including the project for the Salon du Roi and Library at the Palais Bourbon, and murals for the Church of Saint-Sulpice. He also painted scenes for the library of the Chamber of Peers at the Luxembourg palace. All of this decorative work was physically draining for the artist, and beginning in 1844 Delacroix began to spend more time at his country house at Champrosay where he could rest and recuperate.

His later life was marked by periods of poor health, which impacted his productivity (he had to stop working for a time in the early 1840s). His housekeeper at the time, a woman named Jenny Le Guillou, carefully monitored his recovery. Delacroix never married but was known for affairs with numerous women, including his models and possibly even Le Guillou who was with him until his death and to whom he bequeathed a self-portrait from 1837. Always a lover of literature and music, Delacroix enjoyed gatherings that put him in contact with leading creative people of the era. A friendship with the novelist Georges Sand and her lover, the composer Chopin, for instance, began with a commission to create her portrait. Sand was famous for her practice of dressing like a man, and did so for her portrait, but Delacroix playfully warned her against it as a man, in his opinion, could be "a villainous beast."

In the later years of Delacroix's career, he drew inspiration from nature and painted numerous works featuring gardens and flowers. He also continued to focus on large-scale tableaux and decorations, and in 1850 was selected to paint a mythological scene on the main ceiling of the Apollo Gallery in the Louvre. This work was widely praised and deemed such a success that the artist received 6,000 francs more than originally contracted. These paintings would influence the work of early modernist artists such as Odilon Redon, whose Pegasus and the Hydra (1905) was directly influenced by Delacroix's Louvre ceiling painting Apollo Slaying the Serpent (1850-51).

The greatest rival of Delacroix was none other than Jean-Auguste-Dominique Ingres. It is said that at the time, there was an major artistic disagreement in the art world, summarized as the fight between color and line. Delacroix stood for color, while Ingres, and the Neoclassicist tradition he was continuing from David thought line most important in painting. The two men had various run-ins: in one anecdote, Ingres asked for the windows of the Louvre opened to air out the "smell of suphur" that a prior visit by Delacroix supposedly left in the museum.

Major recognition came late in Delacroix's career with his one-man show at the 1855 Universal Exposition. While thirty-five of his greatest works were exhibited, his two most politicized and controversial works -- The Death of Sardanapalus (1827) and Liberty Leading the People (1830) - were only added after the Emperor intervened and insisted on their inclusion. After this success, in 1857 he was finally elected, after seven failed attempts, to the Académie des Beaux-Arts.

Perhaps Delacroix's most influential friendship from the literary world was with the much younger avant-garde poet and art critic Charles Baudelaire, who enjoyed drink and opium and would later be put on trial for obscenity. Baudelaire was a strong supporter of Delacroix's career and helped champion his art in his writing. In his 1863 The Life and Work of Eugène Delacroix, Baudelaire memorialized the artist calling him "a volcanic crater artistically concealed behind bouquets of flowers" and described how he "was passionately in love with passion, and coldly determined to seek the means of expressing it in the most visible way." Indeed, Baudelaire positioned Delacroix, along with his favorite writer Edgar Allan Poe, as the leader not only of the Romantic movement but of the modern movement in art as a whole.

Delacroix continued to paint until the end of his life, but in his last years, perhaps as a result of personal reflection, he increasingly focused on Christian-themed works. Despite his great artistic output, near the end of his life he wondered about his legacy and once wrote, "What will they think of me when I am dead?"

The Legacy of Eugène Delacroix

The legacy of Delacroix extends beyond his central and generative role within the Romantic movement. His approach to subject matter, the dramatic poses of his figures, his emphasis on expression and emotion, his exploration of natural light in his outdoor landscapes, and his dramatic use of color laid the foundation for the work of the first modern artists, most notably the Impressionists and later Symbolists. In particular, Delacroix's division of tones would have an enormous impact on the work of artists like Monet and Pissarro, among the Impressionists, and his awareness of the power of complementary tones led ultimately to the color theories of Georges Seurat. These artists spoke repeatedly of Delacroix's influence and often created paintings inspired by his most famous works sometimes even directly giving the artist credit. For instance, Pierre-Auguste Renoir's The Jewish Wedding in Morocco (after Delacroix) (1875); Vincent van Gogh's Pieta (after Delacroix) (1889); and Paul Cézanne's Apotheosis of Delacroix (1890-94).

Other artists created visual mementos to the artist as in Henri Fantin-Latour's Homage to Delacroix (1864), which depicted modern artists surrounded by a portrait of Delacroix in acknowledgment of the debt they owed this visionary artist. The influence of Delacroix continued into the 20th century, as seen in Pablo Picasso's The Women of Algiers, after Delacroix (1955). Never one to want to share the spotlight, Picasso nonetheless spoke admiringly of Delacroix, and gave credence to his enormous influence on modern art when he famously stated, "That bastard, he's really good."