Born: July 3, 1738
Boston, Massachusetts
Died: September 9, 1815
London, United Kingdom
Neoclassicism
Main
Biography
Artworks
In this Country [...] there is no examples of Art, except what is to [be] met with in a few prints indifferently exicuted [sic], from which it is not possable [sic] to learn much.
John Singleton Copley
What ever my ambition may be to excel in our noble Art, I cannot think of doing it at the expence of not only my own happyness, but that of a Tender Mother and a Young Brother whose dependance is intirely upon me.
John Singleton Copley
Let me just recommend to you to keep the faces of your portraits, particularly your womens, as Clear of Shade as possible, and make broad Masses of Lights and shade. Practice continually.
John Singleton Copley
•
•
•

John Singleton Copley was born in 1738 to Irish immigrant parents, most likely in Boston, Massachusetts. A tobacconist by trade, his father, Richard Copley, moved to the West Indies around the time of his son's birth in an attempt to improve his failing health where he passed away nonetheless, leaving his son's mother, Mary Singleton, to manage the family business and to raise her son as a single parent.

There is little definitive information about Copley's childhood, which makes his early artistic development difficult to trace. His stepfather, Peter Pelham, an engraver, is thought by scholars such as William H. Whitmore to have introduced Copley to the fine arts. It is highly likely that Pelham instructed Copley in both painting and engraving, but this early exposure to art notwithstanding, Copley was largely self-taught.

Copley's artistic career began in earnest in 1751 at the age of thirteen when, following the death of his stepfather, he set up shop as a painter and engraver to supplement the income from his mother's tobacco shop. There, he painted portraits of Bostonians and British officials. However, these early works, while impressive for a boy of his age, betrayed Copley's inexperience through their occasional crude or awkwardly represented detail. 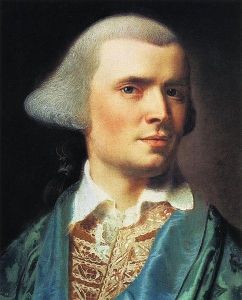 Copley's mature style began to develop after meeting the British artist Joseph Blackburn who had arrived in Boston in 1755. Copley, still in his late teenage years, borrowed elements of popular British portrait painting from Blackburn, including intense jewel tones, elaborate fabrics, and even gestures of Blackburn's sitters. However, according to art historian Janet L. Comey, Copley began to surpass Blackburn by representing his sitters as "more alert and active" and through a "superior ability to replicate sumptuous materials" and to capture "genteel poses". The fine detail in Copley's painting no doubt benefitted from the fact that he had begun to produce books of anatomical drawings based on European examples.

As he matured, Copley continued to seek out examples of art from which he could learn to improve on his own technique. Disappointed by materialistic treatment of the arts in the US, he once lamented the poor public status of American portrait artists: "The people generally regard it [portraiture] no more than any other useful trade, as they sometimes term it, like that of a carpenter tailor, or shrew-maker [sic], not as one of the most noble arts in the world. Which is not a little mortifying to me". Nor did Copley, who also explored making miniatures during this time (though he quickly gave these up as they brought in too little money), receive significant advice or encouragement from his more highly esteemed British counterparts. They ignored the young American's written requests for artistic direction: "I shall not be benefited by them in this country, neither in point of fortune nor fame" he lamented.

This feeling of isolation, coupled with Copley's introversion - it is said he never had a true friend in America, only familial relationships and formal relationships with his sitters - spurred him to try to engage with the art scene in Britain. Recognition arrived for the artist in 1766, when he sent one of his paintings to be displayed in the Society of Artists exhibition. The first President of the Royal Academy, Joshua Reynolds, commented positively about his work while noting Copley's lack of direct access to examples of fine art. Both Reynolds and Benjamin West, a renowned American artist already residing in Britain, noted that there was a certain hardness to Copley's work and duly encouraged him to spend time in Europe to finesse his talent.

Despite this reassurance, and not wanting to make the journey across the Atlantic without the certainty that he would thrive as a portrait painter (as he did in the colonies), Copley decided to stay in Boston. His standing was such that he was able to marry Susanna Farnham Clarke, a member of a prominent Tory family, in 1769. Copley's marriage into a family of Boston's elite granted him access to important individuals who would come to be the founding fathers of the United States. John Hancock, influential patriot of the American Revolution, for instance, was one of his next-door neighbors in his home in (what is now) Beacon Hill.

In the subsequent years, Copley would have his first child, a daughter named Elizabeth, followed by his son John Copley I, and two other children who did not survive into adulthood. This period remains the high point in his artistic career as he painted more quickly and charged more than his competitors for his portraits. He also witnessed some of the most important moments in American history, including the Boston Massacre. Copley longed to remain politically neutral, though his portrait commissions connected him mostly to the Patriots - those republicans who fought for independence from British colonial rule - while his wife's family remained committed Tories - those who supported the conservative and Royalist rule of the Loyalists. As political tensions continued to mount, an incident occurred where Patriots threatened Copley with violence for having Loyalist affiliations: "What if Mr. [Colonel George] Watson had stayed (as I pressed him to) to spend the night. I must either have given up a friend to the insult of a Mob or had my house pulled down and perhaps my family murdered" Copley wrote.

Given that Copley could only reach a limited audience in his colonial town, West, with whom he had entered into regular cross-Atlantic correspondence, had written to Copley suggesting he finally come to England to ply his trade. Though still reluctant to leave his comfortable home life behind, political tensions shifted his attentions back towards Europe and following a six-month journey to New York, where he earned 700 British Pounds painting portraits, and Philadelphia, where he studied replicas of European masterworks, Copley, at West's continued insistence, relocated to London in 1773. 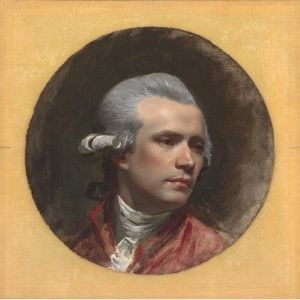 Copley left for Europe at the begining of 1774, leaving behind his elderly mother, his half-brother Henry, his wife, and his four children. Once arrived in London, he was greeted with warmth and kindness, and finally met with his overseas correspondents. He made his most important early connection with British artist George Carter, with whom he traveled to France and Italy where they analyzed first-hand the works of the great European masters. Their friendship quickly soured, however. Carter's diaries provide almost comical descriptions of Copley as a most fussy traveller. Carter recalls telling his companion, "I have taken as much pains as to the mode of conveying you as if you had been my wife, and I cannot help telling you that she, though a delicate little woman, accommodated her feelings to her situation with more temper than you have done". Regardless of these interpersonal complications, Copley finally saw works by Old Masters, though he found himself surprisingly disappointed. Still, looking through hundreds of works in Italy, he nevertheless found the framework to experiment in new "European" ways.

As the Revolutionary War in America inched nearer, Copley urged his wife and their children to leave Boston and meet him in London, which they did in 1775. Although this period is not considered Copley's most productive, he did manage to begin his first historical painting and to receive an invitation to become a member of the prestigious Royal Academy of Arts. His historical scenes showcased a commitment to psychological portraiture - his trademark - combined with an interest in historical scenes. 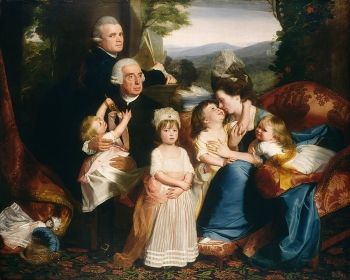 Despite the happiness of being reunited as a family, the Copleys struggled in London. The difficult political situation meant that his assets were stuck in Boston. Although Benjamin West tried his best to secure Copley commissions, Copley struggled to earn enough to adequately support his family. The necessity to earn a living wage convinced him that continuing with his overly-honest American style would not do and he tried to paint in the style that was fashionable. He produced works that, while not especially popular with British academicians and elites, are now considered seminal works in the artist's oeuvre. At this time he also set important precedents when it came to putting on private exhibitions (outside of the Royal Academy) and marketing reproductions of his own work. As Carrie Rebora Barratt of the Metropolitan Museum of Art put it, "the possession of works of art - especially English-style pictures - by an artist as accomplished as Copley was of immeasurable social value. Typically displayed in the halls, parlors, and dining rooms of homes decorated with Chippendale-style furniture, Rococo tea sets, and other fine things, Copley's portraits became centerpieces in the stagecraft of elite, eighteenth-century life".

The tide of personal fortune changed for Copley in 1778 when the Earl of Chatham had a stroke while addressing the House of Commons. The painting he created of the event brought him significant commercial success, temporarily alleviating his financial burdens. This, however, did not keep the artist from feeling homesick. Nor could he escape his financial struggles since the art market in Britain declined in the shadow of the French Revolution, the war with France (declared by France in February 1793), followed by the Irish rebellion in 1798, and a continued decline into the Napoleonic era.

The last fifteen years of his life are described as unhappy. His student H.B. Morse recalls his tutor as being generally combative and irritable. Fortunately, his wife and children managed to physically and financially assist him, even after his first stroke at the age of 78 left him fully paralyzed on his left side. A second stroke, however, left him fully incapacitated. In his biography, his son writes that in moments of clarity, Copley would speak of his readiness to pass away, likely due to his inability to paint anymore. The artist died shortly after his second stroke on September 9, 1815.

The Legacy of John Singleton Copley 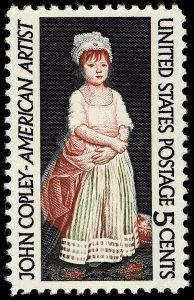 History has shown Copley to be the greatest, and most influential, American colonial painter; his fastidious attention to picture detail coming to define the realist tradition of American art. His legacy stretched throughout the nineteenth century influencing the fastidious luminist style of Fitz Henry Lane and the precise trompe l'oeil still-lifes of William Harnett. Having relocated to London Copley continued with his sophisticated portraiture but his greatest gift to his adopted country was his contribution to the development of contemporary history painting to which he brought a dynamic blend of theater and detail. Public recognition of his significance to early American history is evidenced through spaces like Copley Square in Boston, and a 5-cent stamp produced by the USPS in 1965 bearing one of his paintings.