One must not imitate what one wants to create.

How is one to talk about color? .... Those who have eyes know just how irrelevant words are to what they see.

To work from nature is to improvise.

One must beware of an all-purpose formula that will serve to interpret the other arts as well as reality, and that instead of creating will only produce a style, or rather a stylization.

Art is made to disturb, science reassures.

[Braque was] a model of everything that is skill, serenity, and reflection.

Georges Braque was guided from a young age toward creative painting techniques. His father managed a decorative painting business and Braque's interest in texture and tactility perhaps came from working with him as a decorator. In 1899, at age seventeen, Braque moved from Argenteuil into Paris, accompanied by friends Othon Friesz and Raoul Dufy.

Braque's earliest paintings were made in the Fauvist style. From 1902-1905, after giving up work as a decorator to pursue painting full-time he pursued Fauvist ideas and coordinated with Henri Matisse. He contributed his colorful Fauvist paintings to his first exhibition at the Salon des Independants in 1906. However, he was extremely affected by a visit to Pablo Picasso's studio in 1907, to see Picasso's breakthrough work - Les Demoiselles d'Avignon. After this encounter, the two artists forged an intimate friendship and artistic camaraderie. "We would get together every single day," Braque said, "to discuss and assay the ideas that were forming, as well as to compare our respective works". The drastic change in Braque's painting style can be directly attributed to Picasso. Once he understood Picasso's goals, Braque aimed to strengthen "the constructive elements in his works while foregoing the expressive excesses of Fauvism". His landscape paintings in which scenes were distilled into basic shapes and colors inspired French art critic, Louis Vauxcelles, to coin the term Cubism by describing Braque's work as "bizarreries cubiques." During this pre-war, highly-producive time, Braque (with Pacasso) made large contributions to modern art, particularly through their exploration of Cubism - through the so-called Analytic and Synthetic phases of the movement.

Braque and Picasso worked in synchronicity until Braque's return from war in 1914. When Picasso began to paint figuratively (joining what is known as Interwar Classicism), Braque felt his friend had betrayed their Cubist systems and rules, and continued on his own. However, he continued to remain influenced by Picasso's work, especially in regards to papier collés, a collage technique pioneered by both artists using only pasted paper. His collages featured geometric shapes interrupted by musical instruments, grapes, or furniture. These were so three-dimensional that they are considered important in the development of Cubist sculpture. By 1918, Braque felt he had sufficiently explored papier collés, and returned to still life painting.

Viewers noted a more limited palette at Braque's first post-war solo show in 1919. Yet he steadfastly adhered to Cubist rules about depicting objects from multi-faceted perspectives in geometrically patterned ways. In this, he continued as a true Cubist longer than did Picasso, whose style, subject matter and palettes changed continuously. Braque was most interested in showing how objects look when viewed over time in different temporal spaces and pictorial planes. As a result of his dedication to depicting space in various ways, he naturally gravitated towards designing sets and costumes for theater and ballet performances, doing this throughout the 1920s.

In 1929, Braque took up landscape painting once again, using new, bright colors influenced by Picasso and Matisse. Then in the 1930s, Braque began to portray Greek heroes and deities, though he claimed the subjects were stripped of their symbolism and ought to be viewed through a purely formal lens. He called these works exercises in calligraphy, possibly because they were not strictly about figures but more about sheer line and shape. In the latter half of the 1930s, Braque embarked on painting his Vanitas series, through which he existentially considered death and suffering. Growing increasingly obsessed with the physicality of his paintings, he explored the ways in which brushstrokes and paint qualities could enhance his subject matter.

The objects used in his still lifes were highly personal to Braque, however, he did not reveal these meanings. Skulls, for example, were objects he painted repeatedly at the onset of World War II. In 1944, when World War II ended, Braque began to embrace lighter subjects like flowers, billiard tables, and garden chairs. His final series of eight canvases made from 1948-1955, each titled Atelier, or Studio, depicted imagery that represented the artist's inner thoughts on each object rather than clues to the outside world. At the very end of his life, Braque painted birds repeatedly, as the perfect symbol of his obsession with space and movement.

The Legacy of Georges Braque 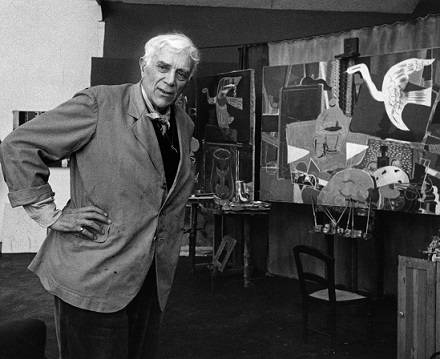 Braque is remembered as a progenitor of Cubism, who was both rational and sensuous in his still life paintings. He was a classic painter in this sense, and has influenced the likes of Jim Dine and Wayne Thiebaud, who focused on still life painting. Braque is also a celebrated colorist, and can be traced through contemporary art to those painters who work with color in similar ways. Perhaps Braque is most remembered for his use of collage, as many contemporary artists, from sculptors like Jessica Stockholder to painters like Mark Bradford, apply paper to their works as a means to comment on society and its products.