Born: February 19, 1876
Hobitza, Romania
Died: March 16, 1957
Paris, France
Dada
Cubism
Direct Carving
Main
Biography
Artworks
What my work is aiming at is, above all, realism: I pursue the inner, hidden reality, the very essence of objects in their own intrinsic fundamental nature; this is my only deep preoccupation.

They are imbeciles who call my work abstract; that which they call abstract is the most realistic, because what is real is not the exterior form but the idea, the essence of things.

Simplicity is not an end in art, but we usually arrive at simplicity as we approach the true sense of things.

Don't look for obscure formulas or mystery in my work. It is pure joy that I offer you. Look at my sculptures until you see them. Those closest to God have seen them.

Matter must continue its natural life when modified by the hand of the sculptor.

When you see a fish you don't think of its scales, do you? You think of its speed, its floating, flashing body seen through the water... If I made fins and eyes and scales, I would arrest its movement, give a pattern or shape of reality. I want just the flash of its spirit.

The second of four children, Brâncuși was born in the small farming village of Hobitza, Romania, in 1876. He had a difficult childhood, in part due to challenging relationships with his father, a property manager of a monastery, and the children from his previous marriage. After several attempts to leave home, Brâncuși finally did so permanently in 1887, at the age of eleven.

From 1889 to 1893, Brâncuși lived in the Romanian city of Craiova, working variously as a waiter, cabinet-maker, and fortune-teller, while attending the School of Arts and Crafts part-time. In 1894, he enrolled full-time at the school, where he excelled in woodworking and ultimately graduated with honors in 1898. Brâncuși then studied modeling and life sculpture at Bucharest's National School of Fine Arts (1898-1902), winning awards for his work in competitions. In 1904, he moved from Romania to Paris, famously travelling most of the way on foot. This story became part of the legend surrounding Brâncuși as a peasant with an exotic heritage; the mythology was actively promoted by the artist himself, who took to wearing Romanian peasant clothing, even on formal occasions, and carved all of his own furniture.

From 1905 to 1907, Brâncuși trained in sculpture and modeling at the Ecole des Beaux-Arts, in the sculpture studio of Antonin Mercie. Brâncuși began working as a studio assistant to Auguste Rodin in 1907, but left after only a month, explaining, "Nothing grows under the shadow of big trees." Yet, his month-long tenure in Rodin's workshop was critical in shaping Brâncuși's aesthetic, taking Rodin's work as a point of departure from which to develop his own drastically different artistic practice, characterized by the use of Direct Carving rather than working from a clay model.

After leaving Rodin's studio, Brâncuși began establishing his own style, beginning with squared works such as The Kiss (1907-08). Despite having the same title as one of Rodin's most famous sculptures, Brâncuși's work was its complete opposite in material and its handling of form and subject. Around 1909, Brâncuși started creating smoother, more contoured sculptures in marble and bronze. He produced multiple, yet distinct versions of works such as The Kiss, Maiastra, and Sleeping Muse, and, by 1912, this career-long method of creating serial versions on the same theme was an established practice in his oeuvre. 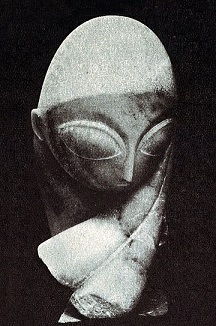 Brâncuși's work made its American debut in 1913, when five of his sculptures appeared in the Armory Show in New York. This landmark exhibition brought together new and avant-garde European and American art, much of which was highly controversial. Marcel Duchamp, whose work was also extremely challenging to critics, became an important friend, advocate, and collector of Brancusi's sculptures. While many critics were puzzled by Brâncuși's work, artists flocked to him, and many began collecting his work. Although Brâncuși lived in Paris for most of his life, making only a few trips to New York, he acknowledged the importance of American collectors and critics to his career, saying, "Without the Americans, I could never have produced all that, nor even perhaps have existed." The photographer Alfred Stieglitz gave Brâncuși his first solo show at his Photo-Secession Gallery in New York in 1914. This successful exhibition also marked the first purchase by collector and modern art advocate John Quinn, who became one of Brâncuși's greatest patrons. That same year, Brâncuși began taking photographs. Many of his photos were of his own studio, recording the specific ways he organized the arrangement of his works, which was highly significant to his creative process, as he considered the base of the sculpture to be just as important as the sculpture itself.

Brâncuși's work continued to provoke public controversy. His Princess X caused a scandal at the 1920 Salon des Indépendants in Paris for its phallic form. Bird in Space became embroiled in a 1927-28 legal battle over the very definition of art when customs officials refused to recognize Bird in Space as artwork, exempting it from customs duties. In response, Edward Steichen, the photographer and owner of the piece, filed a lawsuit. The ruling in Brâncuși's favor constituted a success for abstract art in general. It was also in 1927 that Isamu Noguchi, perhaps Brâncuși's most famous student, worked as his studio assistant.

In the 1930s, Brâncuși engaged in discussions with the Maharajah of Indore about building a temple in India, but the public sculpture was never executed. In 1937-38, he created a monumental three-part public artwork for Tirgu-Jiu, Romania, to honor the Romanian soldiers who had fallen in World War I. Spread across a mile of the town, Table of Silence, Gate of the Kiss, and Endless Column treat sacred, spiritual themes. However, like many of his other works, Endless Column has been a source of dispute. In the 1950s, a Communist attempted to dismantle the work, citing it as a corrupt example of Western art. The sculpture remained standing, but was badly damaged, and eventually underwent a lengthy and controversial conservation effort.

Brâncuși received his first retrospective in 1955 at the Guggenheim Museum in New York. Throughout his life, he had carefully arranged and documented the placement of sculptures in his Paris studio. Just prior to his death in 1957, he left his studio to the city's Museum of Modern Art with the proviso that it be preserved. It is currently reconstructed in a Renzo Piano-designed building outside the Pompidou Center.

The Legacy of Constantin Brâncuși 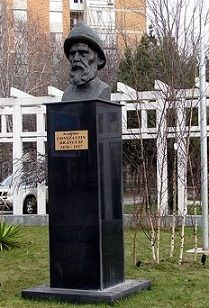 Brâncuși was a pioneering force in modern sculpture, paving the way for many generations of artists. His use of biomorphic forms and integration of his sculptures with their bases influenced the work of such artists as Isamu Noguchi, another major contributor to 20th-century sculpture. Brâncuși's embrace of his materials' distinctive qualities and focus on the technique of Direct Carving were taken up by such sculptors as Henry Moore, Barbara Hepworth, and Jacob Epstein. With its pared-down aesthetic, the reduced forms of his sculptures also had a major impact on the artists associated with the Minimalist movement of the 1960s.