Born: December 7, 1598
Naples
Died: November 28, 1680
Rome
The Baroque
Main
Biography
Artworks
The white marble has to assume the likeness of a person, it has to have color, spirit and life.
Giovanni Lorenzo Bernini
What we have is given by God and to teach it to others is to return it to him.
Giovanni Lorenzo Bernini
To make a successful portrait, one should choose an action and attempt to represent it well; that the best time to render the mouth is when [the subject] has just spoken or is just about to begin speaking; that one should try to catch this moment.
Giovanni Lorenzo Bernini
There are two devices which can help the sculptor to judge his work: one is not to see it for a while. The other... is to look at his work through spectacles which will change its color and magnify or diminish it, so as to disguise it somehow to his eye, and make it look as though it were the work of another.
Giovanni Lorenzo Bernini
•
•
•
•

Giovanni Lorenzo Bernini was born in 1598, the sixth of thirteen children of Angelica Galante and Pietro Bernini. Bernini's childhood was spent in Naples and he began sculpting from an early age working closely with his father, a successful Mannerist sculptor who carried out prestigious commissions in Naples and later Rome. Bernini was a deeply religious Catholic and created his first work at the age of eight. His father encouraged his skill, recognizing early the prodigy he would become. In fact, he was presaged, "the Michelangelo of his age," according to Giovanni's son and biographer Domenico Bernini. This lifelong dedication to practice would lead to Bernini's development of his own style which would go on to greatly contribute to the Baroque movement. The Bernini family moved to Rome in 1606 as Pietro was invited by the Pope to work on the basilica Santa Maria Maggiore. Bernini's first sculpture The Goat Amalthea with the Infant Jupiter and a Faun was started when Bernini was eleven years old. It was reported that when Cardinal Maffeo Barbenini visited the Bernini family workshop he warned Pietro Bernini to be careful, as his son would soon surpass his father. This period had a significant impact on Bernini's artistic career, as Rome was a melting pot of artists of all types, from sculptors and painters to architects, masons and goldsmiths. Work for artists in Rome was flush during most of the seventeenth century as popes funded the modernization and rebuilding of the city.

Bernini's reputation for artistic mastery flourished in the city. Cardinal Scipione Borghese told his uncle, Pope Paul V, about Bernini's work which led to his employment by a succession of six Popes, a role held by Michelangelo before him. This established him within a solid career that would continue for life. Pope Urban VIII reportedly said to him, "you are made for Rome, and Rome for you."

Bernini's first mature sculpture was of Saint Lawrence, completed in 1617. It was described as an "act of pious devotion" to his patron saint and showcased the importance of religion and the theme of devotion, which continued throughout his artistic career. From 1618 to 1625, Bernini worked prolifically, creating masterpieces such as The Rape of Proserpina, David and Apollo and Daphne. Alongside these large-scale sculptures Bernini also created portrait busts, capturing what is now described as a "speaking likeness," or the capturing of a person in action or at the point of uttering words. He said that "the white marble has to assume the likeness of a person, it has to have color, spirit and life," which made his busts differ from more traditional forms and paved the way for a new style. In 1629, Bernini became the chief architect of the Fabric di San Pietro, the institution responsible for maintaining St. Peter's Basilica. In August of the same year Bernini's father died, but Bernini still produced, solidifying his period of dominance in Rome. His association with the court of Rome lasted for fifty years along with close ties to each Pope. According to art historian Daniele Pinton, this was significant because "the history of art affords no other examples with such characteristics, of such creative continuity, for such a long time, by the work of a single artist." Bernini worked closely with his brother Luigi and was naturally entrepreneurial, remaining the dominant sculptor and architect in the city. He often clashed with Francesco Borromini, another noted architect who often lost out on work to Bernini due to the Pope's favoritism. Bernini's workshop was organized like a factory; he rarely refused commissions and delegated work to his assistants, even collaborating once with Borromini on St. Peter's Baldachin despite their rivalry.

Bernini had an affair with his assistant Matteo Bonarelli's wife Costanza, during which he created a bust of her. This pioneered a new era in European sculpture as busts were usually formal portraits reserved for tombs, and had not been used for informal portraits since Ancient Rome. The bust expressed the desire and intimacy between Costanza and Bernini, which would eventually end in scandal. Bernini was known to have a short temper and when he found out that Costanza was having an affair with his brother Luigi, he went after him in rage, beating him almost to death, then ordered a servant to slash Costanza's face. This was a great scandal in Rome at the time, yet due to his position as the Pope's friend, Bernini was not punished. Instead, he was ordered to marry, and thus pursued an arranged marriage with Caterina Tezio in 1639. They later had eleven children. In an ironic twist to this messy story, Luigi was banished from Rome and Costanza was imprisoned, convicted of adultery. During Pope Alexander VII's pontificate (1655-67), Bernini attempted to transform Rome through a costly urban planning project. He managed to recreate the "glory of Rome" that had begun in the 15th century, and he focused on architecture including the piazza leading to St Peter's.

Bernini worked for a stint in Paris in 1665 and this was the only substantial amount of time he was away from Rome since arriving from Naples. He became a popular figure while in France, even being recognized as he walked Parisian streets. King Louis XIV had invited Bernini and other Italian architects to work on the Louvre Palace but Bernini's designs were rejected. He was open about his dislike for French culture and art, making it difficult to gain further commissions in Paris and Bernini's only artwork that remains from this time is a bust of King Louis XIV. After returning to Rome Bernini created an equestrian statue of Louis XIV but when it was delivered to Paris, Louis XIV was unhappy with it and had the head replaced. 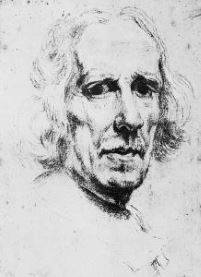 Back in Rome Bernini continued to work for Pope Alexander VII then Pope Clement IX, carrying out improvements for cathedrals and churches in the city. He also created Pope Clement IX's tomb monument and a statue of the successive pope Clement X. Bernini's final work was Salvator Mundi, finished in 1679. It is a marble sculpture of Christ, which he described as his "darling" created out of devotion. He died in 1680 at the age of eighty one and was buried alongside his parents in the Basilica di Santa Maria Maggiore.

The Legacy of Giovanni Lorenzo Bernini When Bernini was alive his work was admired for its innovative presentation of sculpture in new ways, pioneering a new era in European sculpture that became synonymous with the Baroque movement. Leopolgo Cicognara wrote that "perhaps no one, before or after Gian Lorenzo, has left so deep a mark on such a long period of art history; Bernini is synonymous with the Baroque." His work also went beyond what art was expected to do - his work was designed to affect viewers with all the senses and could aid religious experiences, not just on a rational level but also on an emotional one.

He had a major impact on the city of Rome, shaping its architecture and leaving a mark that few artists have since. Bernini is part of a succession of great Italian sculptors placed alongside Donatello, Michelangelo, and Canova.

Bernini was not without his critics. By the end of his life there was a reaction against the extravagance of his work. Scholars like Johann Winckelmann believed art should appeal to the mind whereas Bernini's art appealed excessively to the senses. In fact, "Baroque" was initially deemed a derogatory term in regards to the theatrical nature of Bernini's and other artists' work. However, by the end of the 19th and early 20th centuries, art historians began re-evaluating Bernini's work, writing about the Baroque movement positively, and in the last few decades there have been multiple exhibitions of Bernini's work, placing him as the indisputable father of Baroque sculpture.

Bernini also had a significant impact on future artists, as his focus on sensuality, the flesh, and the human body paved the way for many innovators. In particular, the German Expressionists were highly influenced by Bernini and Baroque art due to their focus on the human experience and intense emotion. Contemporary artists have also referenced Bernini's work such as Ian Hamilton Finlay and Jeff Koons. His technical expertise continues to be studied and his insistence that beauty should be found in observing nature instead of studying classical statues or Renaissance paintings was a move away from the traditional approach to making art, which continued to be practiced long after his death.