Jean-Michel Basquiat was born in Brooklyn in 1960. His mother, Matilde Andradas was born also born in Brooklyn but to parents from Puerto Rico. His father, Gerard Basquiat, was an immigrant from Port-au-Prince, Haiti. As a result of this mixed heritage the young Jean-Michel was fluent in both French and Spanish as well as English. His early readings of French symbolist poetry in their original language would later be an influence on the artworks that he made as an adult. Basquiat displayed a talent for art in early childhood, learning to draw and paint with his mother's encouragement and often using supplies (such as paper) brought home from his father's job as an accountant. Together Basquiat and his mother attended many museum exhibitions in New York, and by the age of six Jean-Michel was enrolled as a Junior Member of the Brooklyn Museum. He was also a keen athlete, competing in track events at his school.

After being hit by a car whilst playing in the street at age 8, Basquiat underwent surgery for the removal of his spleen. This event led to his reading the famous medical and artistic treatise, Gray's Anatomy (originally published in 1858), which was given to him by his mother whilst he recovered. The sinewy bio-mechanical images of this text, along with the comic book art and cartoons that the young Basquiat enjoyed, would one day come to inform the graffiti-inscribed canvases he became known for.

After his parents' divorce, Basquiat lived alone with his father, his mother having been determined unfit to care for him due to her mental health problems. Citing physical and emotional abuse, Basquiat eventually ran away from home and was adopted by a friend's family. Although he attended school sporadically in New York and Puerto Rico, where his father had attempted to move the family in 1974, he finally dropped out of Edward R. Murrow High School in Brooklyn in September 1978, at the age of 17.

Basquiat's art was fundamentally rooted in the New York City graffiti scene of the 1970s. After becoming involved in an Upper West Side drama group called Family Life Theater he developed the character SAMO (an acronym for "Same Old Shit"), a man who tried to sell a fake religion to audiences. In 1976, he and an artist friend, Al Diaz, started spray-painting buildings in Lower Manhattan under this nom de plume. The SAMO pieces were largely text based, and communicated an anti-establishment, anti-religion, and anti-politics message. The text of these messages were accompanied by logos and imagery that would later feature in Basquiat's solo work, particularly the three-pointed crown. The SAMO pieces soon received media attention from the counterculture press, most notably the Village Voice, a publication that documented art, culture, and music that saw itself as distinct from the mainstream. When Basquiat and Diaz had a disagreement and decided to stop working together, Basquiat ended the project with the terse message: SAMO IS DEAD. This message appeared on the facade of several SoHo art galleries and downtown buildings during 1980. After taking note of the declaration, Street Artist contemporary and friend of Basquiat Keith Haring staged a mock wake for SAMO at Club 57, an underground nightclub in the East Village.

During this period Basquiat was frequently homeless and forced to sleep at friend's apartments or on park benches, supporting himself by panhandling, dealing drugs, and peddling hand-painted postcards and T-shirts. He frequented downtown clubs however, particularly the Mudd Club and Club 57, where he was known as part of the "baby crowd" of younger attendees (this group also included actor Vincent Gallo). Both clubs were popular hangouts for a new generation of visual artists and musicians, including Keith Haring, Kenny Scharf, movie director Jim Jarmusch and Ann Magnusson, all of whom became friends and occasional collaborators with Basquiat. Haring in particular was a notable rival as well as a friend, and the two are often remembered as competing with each other to improve the scope, scale, and ambition of their work. The two both gained recognition at similar points in their careers, progressing in parallel to reach the heights of art world stardom.

Due in part to his immersion in this downtown scene, Basquiat began to gain more opportunities to show his art, and became a key figure in the new downtown artistic movement. He, for example, appeared as a nightclub DJ in Blondie's music video Rapture, cementing his cache as a figure within the "new wave" of cool music, art, and film emerging from the Lower East Side. During this time he also formed and performed with his band Gray. Basquiat was critical of the lack of people of color in the downtown scene, however, and in the late 1970s he also began spending time uptown with graffiti artists in the Bronx and Harlem.

After his work was included in the historic Times Square Show of June 1980, Basquiat's profile rose higher, and he had his first solo exhibition in 1982 at the Annina Nosei Gallery in SoHo. Rene Ricard's Artforum article, "The Radiant Child", of December 1981, solidified Basquiat's position as a rising star in the wider art world, as well as the conjunction between the uptown graffiti and downtown punk scenes his work represented. Basquiat's rise to wider recognition coincided with the arrival in New York of the German Neo-Expressionist movement, which provided a congenial forum for his own street-smart, curbside expressionism. Basquiat began exhibiting regularly alongside artists like Julian Schnabel and David Salle, all of whom were reacting, to one degree or another, against the recent art-historical dominance of Conceptualism and Minimalism. Neo-Expressionism marked the return of painting and the re-emergence of the human figure in contemporary art making. Images of the African Diaspora and classic Americana punctuated Basquiat's work at this time, some of which was featured at the prestigious Mary Boone Gallery in solo shows in the mid 1980s (Basquiat was later represented by art dealer and gallerist Larry Gagosian in Los Angeles).

1982 was a significant year for Basquait. He opened six solo shows in cities across the world, and became the youngest artist ever to be included in Documenta, the prestigious international contemporary art extravaganza held every five years in Kassel, Germany. During this time, Basquiat created some 200 art works and developed a signature motif: a heroic, crowned black oracle figure. The legendary jazz musician Dizzy Gillespie and boxers Sugar Ray Robinson, and Muhammad Ali were among Basquiat's inspiration for his work during this period. Sketchy and often abstract, the portraits captured the essence rather than the physical likeness of their subjects. The ferocity of Basquiat's technique, with slashes of paint and dynamic dashes of line, was intended to reveal what he saw as his subjects' inner self, their hidden feelings, and their deepest desires. These works also reinforced the intellect and passion of their subjects, rather than being fixated on the fetishized Black male body. Another epic figuration based on the West African griot, also features heavily in this era of Basquiat's work. The griot propagated community history in West African culture through storytelling and song, and he was typically depicted by Basquiat with a grimace and squinting elliptical eyes fixed securely on the observer. Basquiat's artistic strategies and personal ascendency was in keeping with a wider Black Renaissance in the New York art world of the same era (exemplified by the widespread attention being given at the time to the work of artists such as Faith Ringgold and Jacob Lawrence).

By the early 1980s, Basquiat had befriended Pop artist Andy Warhol, with whom he collaborated on a series of works from 1984 to 1986, such as Ten Punching Bags (Last Supper) (1985-86). Warhol would often paint first, then Basquiat would layer over his work. In 1985, a New York Times Magazine feature article declared Basquiat the hot young American artist of the 1980s. This relationship became the subject of friction between Basquiat and many of his downtown contemporaries, as it appeared to mark a new interest in the commercial dimension of the art market. Warhol was also criticized for potential exploitation of a young and fashionable artist of colour to boost his own credentials as current and relevant to the newly significant East Village scene. Broadly speaking, these collaborations were not well received by either audiences or critics, and are now often viewed as lesser works of both artists.

Perhaps as a result of the new-found fame and commercial pressure put upon his work, Basquiat was by this point of his life becoming increasingly addicted to both heroin and cocaine. Several friends linked this dependency to the stress of maintaining his career and the pressures of being a person of colour in a predominantly white art world. Basquiat died of a heroin overdose in his apartment in 1988 at the age of 27.

The Legacy of Jean-Michel Basquiat 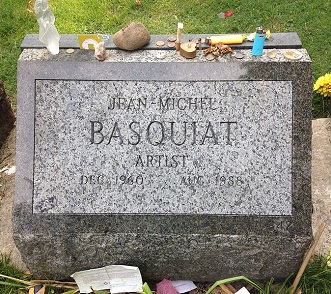 In his short life Jean-Michel Basquiat nonetheless came to play an important and historic role in the rise of the downtown cultural scene in New York and Neo-Expressionism more broadly. While the larger public latched on to the superficial exoticism of his work and were captivated by his overnight celebrity, his art, which has often been described inaccurately as "naif" and "ethnically gritty", held important connections to expressive precursors, such as Jean Dubuffet and Cy Twombly. 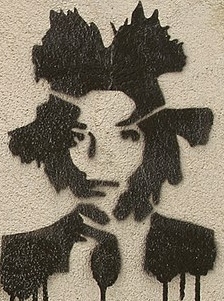 A product of the celebrity and commerce-obsessed culture of the 1980s, Basquiat and his work continue to serve for many observers as a metaphor for the dangers of artistic and social excess. Like the comic book superheroes that formed an early influence, Basquiat rocketed to fame and riches, and then, just as speedily, fall back to Earth, the victim of drug abuse and eventual overdose.

The recipient of posthumous retrospectives at the Brooklyn Museum (2005) and the Whitney Museum of American Art (1992), as well as the subject of numerous biographies and documentaries, including Jean-Michel Basquiat: The Radiant Child (2010), and Julian Schnabel's feature film, Basquiat (1996; starring former friend David Bowie as Andy Warhol), Basquiat and his counter-cultural legacy persist. In 2017, another film Boom for Real: The Late Teenage Years of Jean Michel Basquiat was released to critical acclaim, also inspiring an exhibition of the same title at the Barbican art gallery in London. His art remains a constant source of inspiration for contemporary artists, and his short life a constant source of interest and speculation for an art industry that thrives on biographical legend.

Alongside his friend and contemporary Keith Haring, Basquiat's art has come to stand in for that particular period of countercultural New York art. Both artists' work is frequently exhibited alongside the other's (most recently in the 2019 exhibition 'Keith Haring I Jean-Michel Basquiat: Crossing Lines' in Melbourne, Australia), and there have been several commercial licenses granted for the reproduction of several of his visual motifs. Recently this has included a range of graphic print shirts at Uniqlo displaying the work of both artists.

The rise in Basquiat's profile since his death has also inspired new artists to make work inspired by or even in direct reference to his work. This includes painters, graffiti and installation artists working within the gallery, but also musicians, poets and filmmakers. Visual artists influenced by Basquiat include David Hewitt, Scott Haley, Barb Sherin, and Mi Be in North America, as well as European and Asian artists such as David Joly, Mathieu Bernard-Martin, Mikael Teo, and Andrea Chisesi, all of whom cite his work as formative to their own development. Musicians such as Kojey Radical, Shabaka Hutchings, and Lex Amor have similarly praised his work as informing their own. These three musical artists in particular appeared alongside others on Untitled, a collaborative compilation released as a tribute to Basquiat in 2019 by London based record label The Vinyl Factory.